If you are reading this article, it’s probably because you want to know how to disable Google AMP and turn AMP off for your Google searches. And you probably want to get rid of AMP because it’s annoying as hell, especially if you like to share links, and want to share the actual source link, not Google’s AMP link. The thing is, you can’t technically disable Google AMP, but you can get around it. So, here’s how to get rid of Google AMP.

All your URLs are belong to us

The reason you can’t just ‘turn it off’ is because it isn’t actually ‘turned on’ in any real sense of the word. What is happening is that whenever you do a Google search from your mobile device, Google detects that it’s a mobile device, and reroutes your search request through their AMP servers, rather than through their regular servers, causing the link to the article, etc., to become a link to Google’s AMP system, and then rerouted through there to the actual target source.

Of course, this also means that millions of people who share links that they have found through Google (say, a news headline that you want to share on Facebook) are now sharing Google’s links, rather than the direct link.


And that, as Google might say, is a beautiful thing. For Google. 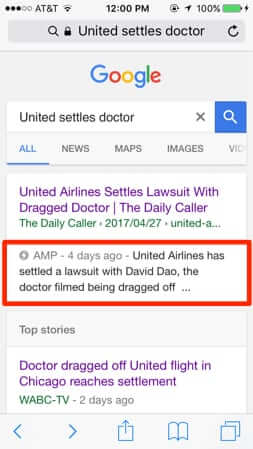 You do a Google search on your phone. You want to be able to go to the original source, but all of the results are now rendered via Google AMP.

Even when you go to a site from your search result, while you are seeing the article you wanted, the URL is still a Google AMP URL. 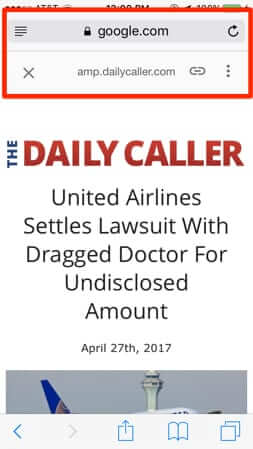 Now when you share a search result on, for example, social media, you are actually sharing the Google AMP result – which is, in fact, not even clear, as that fact is cloaked by the display of the source domain in the post on social media, even though it really goes through Google AMP.

Now, to address the unhappiness over this, Google has provided what they call the AMP header. You can click on the AMP header to reveal the actual URL of the story you are reading, and then you can click on that revealed URL to go to the actual source. So, two extra clicks, and however many extra seconds, just to get to the real source (when before AMP, you would automatically end up at – you know – the real source). 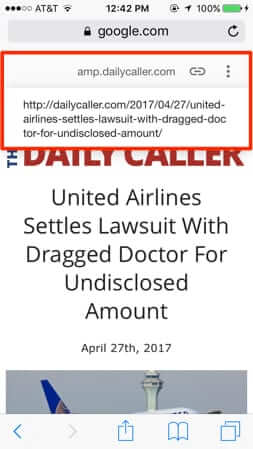 That is the only official, Google-approved way to ‘get around’ Google AMP.

But there are other ways around AMP. And here they are.

NOTE: METHOD #1 BELOW (USING ENCRYPTED.GOOGLE.COM) HAS NOW BEEN DISCONTINUED BY GOOGLE :~( WE ARE LEAVING IT UP SO PEOPLE WHO MAY HAVE BEEN USING IT CAN KNOW THAT GOOGLE DISCONTINUED IT

Instead of starting your Google search from the search bar, go to encrypted.google.com, and type your search in the resulting search bar. This will force your search to be conducted via Google’s encrypted servers, rather than their AMP servers. 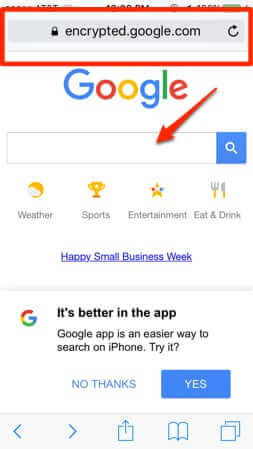 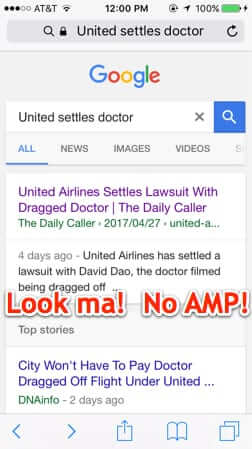 If you are willing to do without Google at all, perhaps the simplest method of dealing with Google AMP is changing the default search engine in your mobile browser from Google to something else, such as Duck Duck Go, Bing, or even Yahoo.

In iOS you do this by going to your Safari settings: 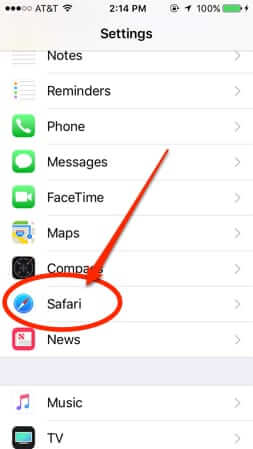 And then changing the default search engine: 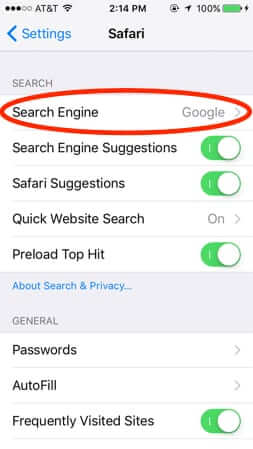 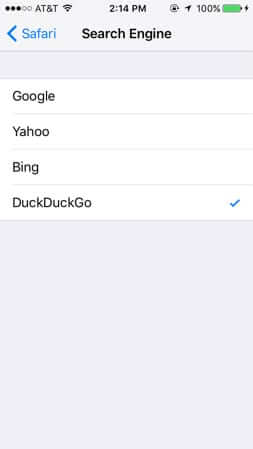 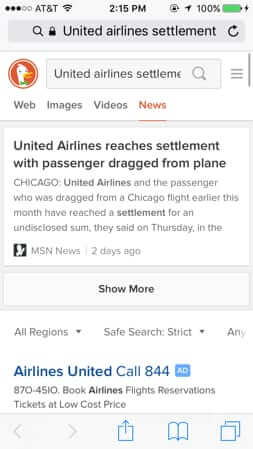 To change your default search engine in Google Chrome on an Android phone, from within Chrome go to Settings, and you will see the option to change your search engine there in the Settings window. You can choose from Yahoo, Bing, Ask, and AOL.

Another way to get rid of Google AMP is to trick your browser into thinking that it is not a mobile browser, but rather a desktop browser. This is because Google AMP is specifically for mobile (remember that AMP stands for Accelerated MOBILE Pages).

The way that a browser identifies itself to the world (and to websites which it is browsing) is by something called the “User Agent”. Typically a mobile browser User Agent includes the information about the mobile device on which it is being used. Browsers that are being used on desktops obviously do not by default announce themselves as being on a mobile device.

This is useful to know because it means that if you can stop your mobile browser from self-identifying as being on a mobile device, then Google AMP won’t kick in.

In other words, if you can spoof your mobile browser’s User Agent to appear to be a desktop browser, Google AMP will go away (although some websites will figure out that you are spoofing, and serve up the mobile version anyways, but they are in the minority).

While neither Safari for iOS, nor more recent versions of Chrome for Android, offer the ability to switch your User Agent, there are other browsers which do.

For iOS, we can confirm that both [Page no longer available – we have linked to the archive.org version instead] and iCab Mobile Browser offer the option of switching your User Agent (note that iCab’s default search engine is DuckDuckGo, so if you choose to use iCab, you will have to switch it back to Google).

In Opera Mini, it’s super-easy. You just open up the settings area and it’s right there at the bottom of the screen. 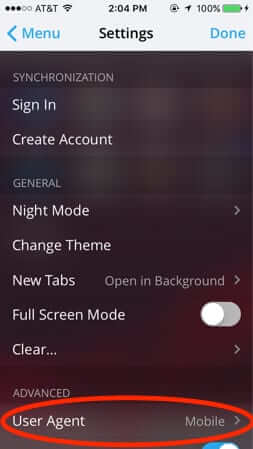 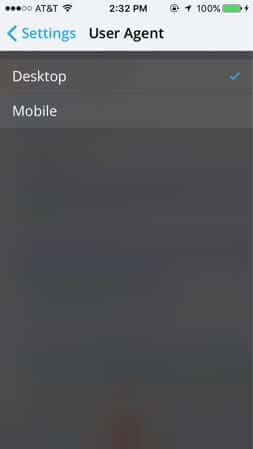 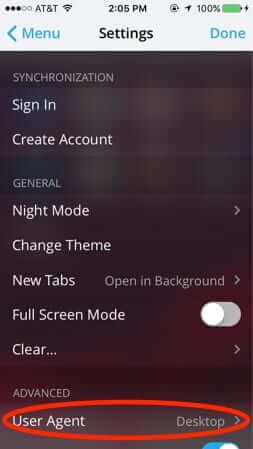 To change your User Agent to desktop with iCab go to Settings and select Tools > Browser ID. 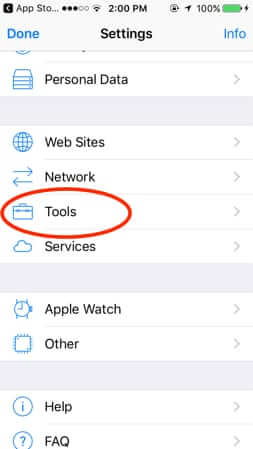 By Default iCab Identifies Itself as Safari (iPhone) 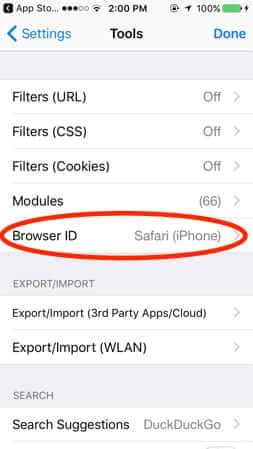 You have to go to a second Browser ID setting screen to actually change the Browser ID in iCab. 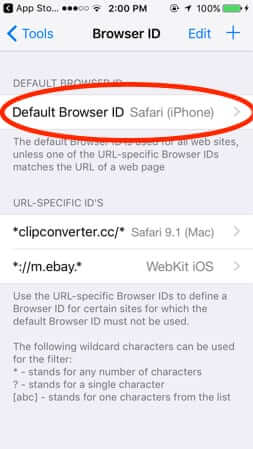 But once you are there you have a lot of options! 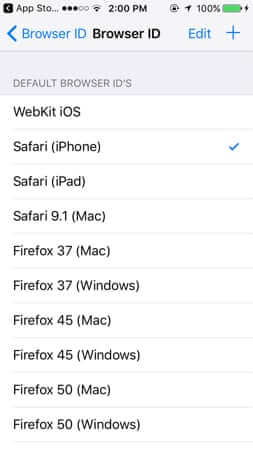 Now Google thinks that our iPhone is an OSX device! 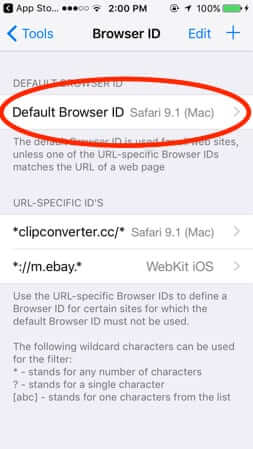 The downside of using a different browser in iOS is that there is no way to tell your mobile to use a different default browser. So you will always have to open the non-default browser first and conduct your search from within the browser.

Now, if you are on an Android phone, we have heard really good things about Dolphin browser for Android, and Dolphin easily lets you switch your user agent (here are their directions for switching your Android user agent to Desktop).

There is also an Android app called User Agent Switcher for Chrome, however it doesn’t work if you are on Android 7 or later.

How to Unsubscribe from Google Birthdays Calendar
How to Deal with the "Operation Can't be Completed Because the Item "Bands" is in Use" Error
How to Convert an Audio File to Video to Post an Audio File to Facebook or YouTube in 1 Easy Step!
Mac Finder Slow or Not Responding? What to do With A Frozen Finder
Google Lens and How To Use It To Identify Things In Your Daily Life
How to Turn Off and Disable Operation Amber Alerts on Your iPhone and Android Phone
Gmail’s Spam Problem and What You Can Do About It
How to Block, Opt Out of and Remove Ads by Adblade
ios disable amp, disable google amp ios tweak
Share the knowledge

Number of people who have enjoyed this article: 20,679