Craig Lynch, also known as Craig Lazie Lynch (not sure why it’s “Lazie” instead of Craig Lazy Lynch) escaped from Britain’s Hollesley Bay Prison more than 3 months ago, on September 23rd. Still on the lam, he hasn’t gone underground – in fact, far from it. In fact, Craig Lazie Lynch has been driving British law enforcement mad by regularly updating his Facebook profile, taunting authorities and building a huge following of fans in the process.

And these aren’t just subtle hints that he is posting. Craig Lazie Lynch has gone so far as to post on Facebook that he was taking his “little princess” to meet Santa at the mall, later posting that he was in the mall, carrying a huge Winnie the Pooh doll (all of this suggesting that the 28-year-old Lynch has a daughter, making Lynch all the more an anti-hero to his thousands of Facebook fans).

But it isn’t just the Winnie the Pooh factor that has garnered Lynch thousands of fans (more than 13,000 as of this writing) – and it isn’t even just his in-your-face Facebook posts, such as posting a picture of himself holding a Christmas turkey, and flipping another kind of bird for the camera, with the caption “if any of you was doubtin my freedom. Here’s proof. How the f-ck could i get my hands on a bird like this in jail. ha ha”.

There’s more to it than that. There is a humanity and a glaze of decency which comes across in his posts. Such as when he hears a siren, thinks that he is finally busted, and then realizes that it’s an ambulance, and says “false alarm it was an ambulance..oh no I think its the old lady in the bungalow opposite. I hope shes alright. I’m goin over”.


Or when he creates an Internet group dedicated to stiffer prison sentences for those who abuse animals, emploring his followers “Please can u join this group SUPPORT PRISON SENTENCES FOR CRUELTY TO ANIMALS’ this is a subject very close to my heart as it was set up after a very good friend of mines dog was brutally attacked by an axe wielding thug. Please fellow friends,fans,supporters and family join this group now, we r tryin to raise government awareness. A dog is not just a pet it is a member of ur family.Ur best friend and companion thanx.”

Small wonder, then, that Lynch is seeing so much support in the comments to his Facebook posts.

In fact, Lynch ended up having to move from his regular Facebook profile: 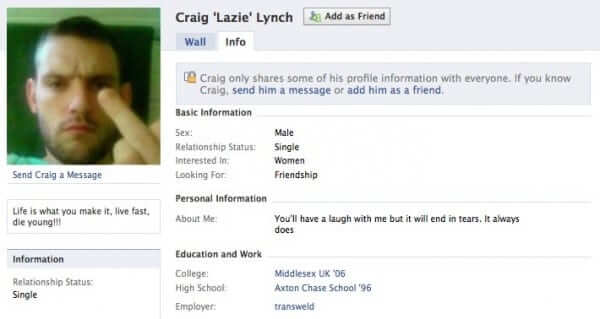 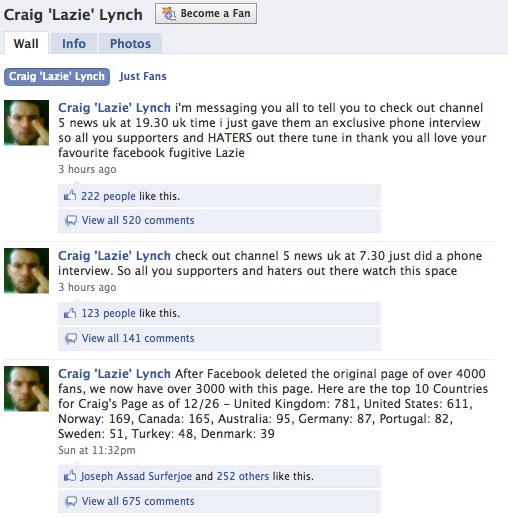 But that doesn’t change that he is, at the end of the day, a convict on the run – a fugitive from justice, who has escaped from prison.

Even Lynch seems resigned to the fact that at some point they will catch up with him – even asking his Facebook followers if they think “i should stay running”, and “In my situation where would YOU hide?” and talking about waking up and expecting the police to crash in through the door (“then i remembered. The old bill {Ed. note: the police} are thick as sh-t.”)

Meanwhile, a police spokesperson has said that “We have spoken to Facebook and we are trying to trace him from the information we have, but it’s one of those things that we’re also asking for help from members of the public.”

Really the only question at this point is what is Lynch facing? We’re pretty sure that whatever his new sentence will be once caught, there’ll be a TV movie deal at the end of it.

ISIS Calls Anonymous 'Idiots' as Anonymous Declares War on ISIS
Mark Zuckerberg Announces that Facebook Will Now Be All About Privacy and Unified Messaging Across W...
Plot Thickens as FIFTH Undersea Internet Cable Outage Reported and Iran Taken Offline
How to Know If You Are Interacting With a Bot
How to Find a List of All of Your Facebook Groups and How to Leave Them
What Does the Trans-Pacific Partnership (TPP) Mean for Spam?
Facebook "Intentionally Exploited Vulnerability in Human Psychology" says Facebook Founder
Police to Residents: Facebook Going Down is NOT a 911 Emergency!
Share the knowledge

Number of people who have enjoyed this article: 10,777