After the pressure of a boycott by advertisers (remember, folks, money is always where it most hurts companies), Facebook has finally copped to the fact that they need to do a better job at policing and disallowing images and words that depict or encourage or glorify domestic violence (calling status updates that discuss it “hate speech”).

Said Facebook’s VP of Global Public Policy, Marne Levine, “In recent days, it has become clear that our systems to identify and remove hate speech have failed to work as effectively as we would like, particularly around issues of gender-based hate. In some cases, content is not being removed as quickly as we want. In other cases, content that should be removed has not been or has been evaluated using outdated criteria.”

An example of the problem is a meme (photo with words superimposed on it) that has recently been circulating on Facebook, of a woman’s face, with duct tape over her mouth, and the words “Won’t wrap it and tap it, tape her and rape her.” 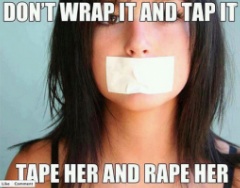 Facebook will be working with “legal experts and others, including representatives of the women’s coalition and other groups that have historically faced discrimination,” added Levine.

Part of Facebook’s pledge includes revealing the true identity of anyone who publishes such content. Said Levine, “If an individual decides to publicly share cruel and insensitive content, users can hold the author accountable and directly object to the content.”

Part of the problem, however, is that there is a fuzzy grey line between ‘hate speech’, which is forbidden on Facebook, and ‘offensive speech’, which is not necessarily verboten (after all, people have differing sensitivities and what is offensive to one person may be generally acceptable to most people). While the above image clearly crosses the line with its overt call to action, other images and words may be more open to interpretation.

“While there is no universally accepted definition of hate speech, as a platform we define the term to mean direct and serious attacks on any protected category of people based on their race, ethnicity, national origin, religion, sex, gender, sexual orientation, disability or disease,” said Levine.

In otherwords, if it’s not politically correct, it’s probably forbidden.

The interplay between social media, political correctness, society, and the 1st Amendment is always a good time.

Facebook has added five steps it promises to “roll out immediately” in order to improve its reaction to misogynistic content.

First, Facebook will review and update guidelines used to evaluate how it responds to reports of hate speech. It will also add training for staff who must evaluate those reports.

Facebook also promises to continue speaking with women’s groups, and will petition to have those groups included in Anti-Defamation League’s Anti-Cyberhate working group.

Most dramatic, however, might be Facebook’s pledge to “out” anyone who posts hateful content; it wants users to stand behind anything they post with their actual identities.

Facebook’s announcement came a week after Women, Action and the Media urged the social media giant to take greater action against content that “trivializes or glorifies violence against girls or women,” Reuters said.

The group also said Facebook users should alert advertisers when their products appear next to offensive content.

According to MediaWeek in the UK, roughly 13 advertisers have pulled their Facebook ads in response, including carmaker Nissan.

Laura Bates of the Everyday Sexism Project and writer Soraya Chemaly signed the letter alongside Women, Action and the Media.

To reinforce their efforts with Facebook, the trio sent 5,000 emails, The New York Times said.

“Your refusal to similarly address gender-based hate speech marginalizes girls and women, sidelines our experiences and concerns, and contributes to violence against them,” the letter said.

“Facebook is an enormous social network with more than a billion users around the world, making your site extremely influential in shaping social and cultural norms and behaviors.”

Starbucks Giving Away Free Pints of Ice Cream via Facebook Right Now
Should You Have a Social Media Prenup and Are They Enforceable?
How to Remove a Shop from Your Facebook Page (with Screenshots)
WhatsApp Users Leaving for WhatsApp Alternatives in Droves Following Facebook Acquisition
Yes, Facebook IS Down - and So is Instagram - Happy Thanksgiving!
What Does #hmu4atbh Mean? We Explain
Studies Show Nobody Reads Terms of Service
Insiders Urge Facebook and Apple to Fix Toxic, Intentionally Addictive Nature of Social Media and De...
email address AND Marne Levine, phone number AND Marne Levine
Share the knowledge

Number of people who have enjoyed this article: 4,028