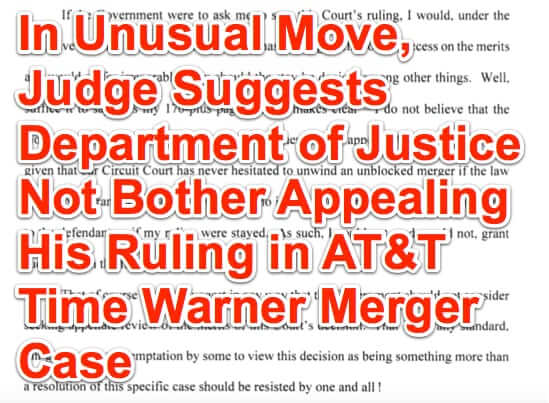 In an unusual move, the Court that issued the decision in the AT&T Time Warner antitrust lawsuit yesterday warned the losing party (that would be the U.S. Department of Justice ), essentially, not to bother trying to appeal his ruling. In his 172 page ruling in the case of the United States of America versus ATT Inc, et al, Judge Richard Leon says, among other things, and we quote, “I do not believe that the Government has a likelihood of success on the merits of an appeal.”

Judge Leon starts out by setting the scene, saying in the very first paragraph of the opinion that “If there ever were an antitrust case where the parties had a dramatically different assessment of the current state of the relevant market and a fundamentally different vision of its future development, this is the one. Small wonder it had to go to trial!” He then goes on to paint a picture of the two different views presented by the government and AT&T:

“The Government claims, in essence, that permitting AT&T to acquire Time Warner is likely to substantially lessen competition in the video programming and distribution market nationwide by enabling AT&T to use Time Warner’s “must have” television content to either raise its rivals’ video programming costs or, by way of a “blackout,” drive those same rivals’ customers to its subsidiary, DirecTV.”

“Not surprisingly, the defendants, AT&T, Time Warner, and DirecTV, strongly disagree. Their vision couldn’t be more different. The video programming and distribution market, they point out, has been, and is, in the middle of a revolution where high-speed internet access has facilitated a “veritable explosion” of new, innovative video content and advertising offerings over the past five years.”

Judge Leon goes on to say that “Those were the circumstances that drove AT&T, a distributor of content, and Time Warner, a content creator and programmer, to announce their historic $108 billion merger in October 2016 (the “proposed merger” or “challenged merger”). Those are the circumstances that cause them to claim today that their merger will increase not only innovation, but competition in this marketplace for years to come.”

Much of the opinion goes on to explain anti-trust in general, and in specific, and concludes that the government failed – rather miserably – to make any case that the merger should not be allowed, and then goes on to explain that “Since announcing the transaction in late October 2016, defendants have delayed closing on the merger agreement for about 18 months as a result of the Government’s investigation and suit. The deal is now set to expire if not consummated on or before June 21, 2018 — a turn of events that would require AT&T to pay Time Warner a “break-up fee” of $500 million…” explaining towards the end of the opinion that AT&T and Time Warner had “extended the break-up date to accommodate the Government’s litigation of this case. During that same period, the video programming and distribution industry has continued to evolve at a breakneck pace. The cost to the defendants and the Government to investigate, litigate, and try this case has undoubtedly been staggering — easily in the tens of millions of dollars.”

And then Judge Leon makes the following, rather stunning, statement: 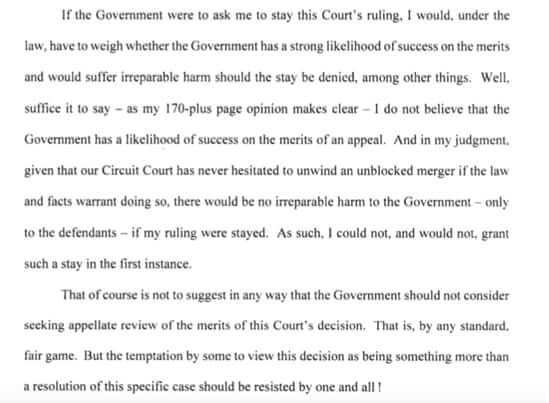 “If the Government were to ask me to stay this Court’s ruling, I would, under the law, have to weigh whether the Government has a strong likelihood of success on the merits and would suffer irreparable harm should the stay be denied, among other things. Well, suffice it to say — as my 170-plus page opinion makes clear — I do not believe that the Government has a likelihood of success on the merits of an appeal. And in my judgment, given that our Circuit Court has never hesitated to unwind an unblocked merger if the law and facts warrant doing so, there would be no irreparable harm to the Government — only to the defendants — if my ruling were stayed. As such, I could not, and would not, grant such a stay in the first instance.”

Which is basically longhand for “Don’t bother appealing my ruling, Justice Department.”

Of course, a judge cannot tell a party not to appeal, so Judge Leon goes just short of that above, and then goes on to say – undoubtedly because he must:

“That of course is not to suggest in any way that the Government should not consider seeking appellate review of the merits of this Court’s decision. That is, by any standard, fair game. But the temptation by some to view this decision as being something more than a resolution of this specific case should be resisted by one and all.”

Then, to put a final nail in the appeals coffin, Judge Leon concludes:

“The Government here has taken its best shot to block the merger based on the law and facts, and within the time allowed. The defendants did their best to oppose it. The Court has spoken. To use a stay to accomplish indirectly what could not be done directly — especially when it would cause certain irreparable harm to the defendants — simply would be unjust. I hope and trust that the Government will have the good judgment, wisdom, and courage to avoid such a manifest injustice. To do otherwise, I fear, would undermine the faith in our system of justice of not only the defendants, but their millions of shareholders and the business community at large.

Thus, for all of the foregoing reasons, the Government’s request to enjoin the proposed merger is DENIED.”

You can read the full 172 page opinion in the AT&T Time Warner case here.

Administration's New Disinformation Governance Board Confirmed During House Hearing
Roundup: Washington, Massachusetts, New York, Maryland, Rhode Island, and Hawaii All Have GDPR-Like ...
Hate Being Added to Email Mailing Lists without Your Permission? Now is Your Chance to Let the FTC K...
No Warrant Necessary for Law Enforcement to Access Data Stored in the Cloud
Please Welcome Our Sister Site: Explaining the Law.com!
Teen Prosecuted as Adult for Having Naked Pictures of Himself on His Own Phone
Mugshots.com Torn a New One by Judge for Charging for Removals
How to Get Yourself Into Trouble with the Camera on Your Phone
Share the knowledge

Number of people who have enjoyed this article: 1,103