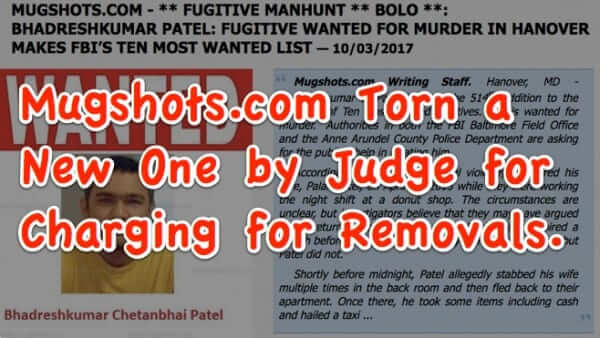 A few years ago we told you about some lawsuits against Mugshots.com and other websites which post the mug shots of those charged with crimes. While the particular lawsuit that we covered, Kaplan and Lashway v. Mugshots, et al, was settled, others were not, and now a Federal judge has ruled that the plaintiffs in a case out of Illinois and Florida against Mugshots.com and UnpublishArrest.com have made a strong enough case for it to move forward, despite the defendants’ motion to dismiss the entire lawsuit for failure to state a claim upon which relief can be granted (known to legal folks as a Rule 12(b)(6) motion).

Of course the background to this is that when somebody’s mug shot and related arrest record are posted on Mugshots.com (and similar sites), they are being charged to have their mug shot removed from the site. Even if they have since completed their sentence, or, presumably, even if they’ve been found innocent..

And employers, prospective employers, and others are finding these stale mug shots. In the current lawsuit, at least one of the plaintiffs had job offers rescinded because of the Mugshots.com listing, and he was even fired after co-workers found his mug shot on Mugshots.com, even though the mug shot was from his prior life and he had already completed his sentence. So he followed the advertisements on Mugshots.com for the affiliated UnpublishArrest.com, in order to have his stale mug shot removed from the site, at which point UnpublishArrest.com told him that “removing the two images from the Mugshots.com website would cost $2,000 plus a representation fee. Removal of the entire profile would be $15,000 and a representation fee. The representative further stated that payment did not guarantee removal of the profile.”

Instead of paying what felt like an extortionary fee, the plaintiffs filed the lawsuit.

The plaintiffs’ complaint had nine counts (allegations of violations of a particular law) in total. Mugshots filed a motion to dismiss all of them based on that Federal Rule 12(b)(6) failure to state a claim on which relief can be granted. What this means, basically, is that Mugshots was saying “none of what they are alleging matches up to the laws they are claiming we violated and so there is no relief to be found for what they are alleging under the laws they are claiming. So their complaint should be dismissed.”

As described in the complaint, the arrest profiles are designed to coerce plaintiffs to pay for removal. In other words, the mugshots themselves are advertisements for the removal service, which is the far more lucrative enterprise.

The plaintiffs’ nine counts (claims) were:

1. Violation of the Illinois Right of Publicity Act (“IRPA”)

3. Violation of the Illinois Mugshots Act

4. Violation of the Racketeer Influenced and Corrupt Organizations Act (“RICO”)

6. Violation specifically of the disclosure provisions of the FCRA

7. Violation specifically of the accuracy requirements of the FCRA

8. Violation of the Florida Right of Publicity Act (“FRPA”)

While the court, following a detailed analysis by Judge Sharon Johnson Coleman, dismissed counts 2, 4, 5, 6, and 7, it kept live counts 1, 3, 8, and 9. In other words, the court is allowing the plaintiffs to move forward on the claims based on the Illinois Right of Publicity Act, the Illinois Mugshots Act, the Florida Right of Publicity Act, and the Florida Deceptive and Unfair Trade Practices Act.

In denying the RICO claim, basically claiming extortion, the court explained that “The problem here is plaintiffs are not threatened with exposure because the arrest records are already published. While potentially embarrassing, they are public records protected by the First Amendment and plaintiffs do not meaningfully challenge the defendants’ ability to re-publish truthful arrest records. The allegations claim that defendants are essentially threatening not to remove them unless plaintiffs pay a fee, which plaintiffs have refused to do. Those allegations simply do not fit the parameters of either statute.”

While it is perhaps a pity that the court had to strike the claims based on RICO, Judge Coleman went on to say, in no uncertain terms, that the racket that Mugshots.com and UnpublishArrest.com is running, requiring large amounts of money in order to have a hope of having profiles removed from Mugshots.com (and with no guarantee of removal at that) clearly is close to, if not amounting to the legal definition of, extortion.

Observed Judge Coleman, “As described in the complaint, the arrest profiles are designed to coerce plaintiffs to pay for removal. In other words, the mugshots themselves are advertisements for the removal service, which is the far more lucrative enterprise.”

(That ‘lucrative enterprise’ is UnpublishArrest.com.)

So the lawsuit is moving forward with the four counts still intact. Watch this space for any updates!

Number of people who have enjoyed this article: 641