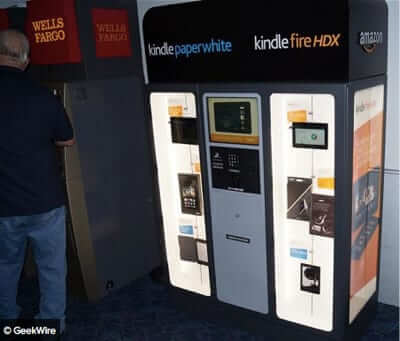 Now here’s an idea that makes perfect sense: a vending machine that sells Amazon Kindles – called the “Kindle Kiosk”. The Kindle Kiosk is slated to be installed in select airports and malls around the country, but have only just now been spotted in the wild at an airport (a few appeared at malls over the holiday season), and we are building a list of airports that have the Kindle Kiosk.

The first spotting of a Kindle Kiosk was at Las Vegas’ McCarran Airport, which makes perfect sense, as the Consumer Electronics Show (CES) is there.

NOTE: Please be sure to let us know where you have seen a Kindle Kiosk! Help us build a list of airports that have the Kindle Kiosk!

According to GeekWire, they received an email from an Amazon spokesperson which said, in part, ” “We’re very happy with the customer response so far, and are excited to give customers (like you!) another easy way to purchase accessories and also Kindle e-readers and Kindle Fire tablets.”

Installing Kindle Kiosks at airports makes a great deal of sense – why by a $7.00 magazine, that you will end up throwing away, to pass the time while waiting for your flight, when you can grab a Kindle and have as much reading material as you could possibly want for your entire trip, and beyond?

And with the added bonus that you don’t even have to wait for Amazon to ship it to you, like you do when ordering on their site!

How to Search for and Find a Specific Amazon Review
How to Remove Skills from Alexa without Having to Go Through the App
Amazon Echo Alexa Now Lets You Create Your Own Interactive Custom Skills - But There's a Catch
Amazon Sidewalk Uses Your Alexa Devices to Share Your Internet with Your Neighbors Unless You Opt Ou...
How to Use Amazon Music Unlimited with Your Echo or the Amazon Music App (and List of Side-by-Side A...
Amazon Announces Alexa-Enabled Wireless Earpod Competitor Earbuds - But are They Really?
Amazon Key: For When You Feel Like Letting a Stranger Into Your Home When You're Not There
Amazon Echo Invitation Goes Out with Release Date of "Several Months"
Share the knowledge