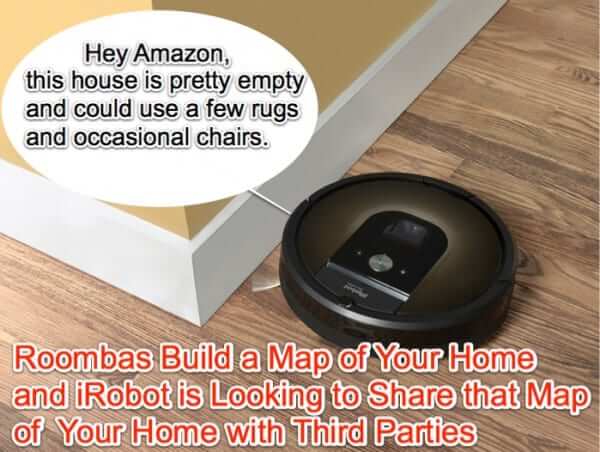 iRobot, the company behind the Roomba vacuum, along with other cleaning robots, has sold 15 million of those little suckers worldwide. Part of the Roomba’s brilliance is mapping your house in order to be as effective and efficient as possible. However, many people are not aware of this mapping feature, and even those who are may not realize that the mapping data – i.e. the map of their home – is being sent back to iRobot HQ, and stored in the cloud. Nor have they likely realized that iRobot might like to share the map of their home with others. But that is exactly part of iRobot’s business strategy.

In an interview with Reuters last month, iRobot CEO Colin Angle explained “There’s an entire ecosystem of things and services that the smart home can deliver once you have a rich map of the home that the user has allowed to be shared.”


According to Angle, iRobot expects a deal to be reached with one of Amazon, Apple, or Alphabet (nee Google) within a few years. In fact as of earlier this year, iRobot had already worked with Amazon to enable your Amazon Echo to be able to control your Roomba. 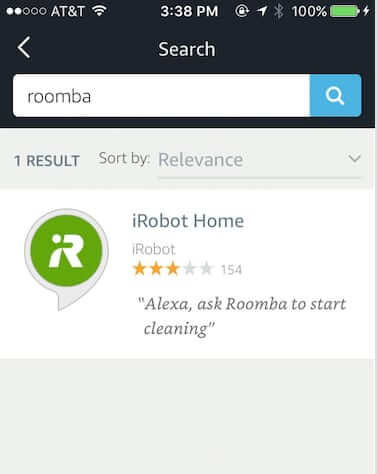 In a press release about the new Amazon Echo feature, iRobot said “Combining adaptive navigation with visual localization, iRobot Roomba 900 Series vacuuming robots build a map of a home as they clean. Clean Map reports make these maps visible to customers in the iRobot HOME App after a cleaning job is complete, showing total area and duration a Roomba® 900 Series vacuum cleaned — for up to 30 cleaning jobs. Leveraging Dirt Detect™ – an iRobot patented feature only found on Roomba vacuuming robots – Clean Map reports also provide users with information about where the robot encounters higher concentrations of dirt or debris, providing a more focused cleaning in those areas. With the addition of Clean Map reports, users can now have greater confidence in knowing the vacuuming is complete.”

iRobot has been on record as early as the fall of 2014 about its vision-based navigation (mapping) system, when iRobot’s Chris Jones presented on iRobot’s vision-based nav system at the 2014 IEEE/RSJ International Conference on Intelligent Robots and Systems.

And to be clear, it is only those with the newer versions of the Roomba that have come out within the last few years, and that connect via wifi, bluetooth, or are otherwise network-connected, who need to be concerned about this crafty little bot mapping their home and then sharing the map up to the iRobot cloud, where iRobot can then distribute the map of your home.

As Gizmodo says, “Maybe that doesn’t unnerve you, but it probably should.”

Now, to be fair, originally it was reported that iRobot was planning to sell that map data to third-parties. However, in a follow-up piece in Forbes, iRobot clarified:

“It never intended to sell customer map data although it has thought about making the maps freely available to third parties in ways that will benefit iRobot’s customers if the customers give prior permission.”

In other words, they are not going to sell your data, they are going to give it away. To third parties. For free.

And even right now, at least one enterprising third-party has already figured out how to tap into your maps (for your own use, however). Maparoo is an app that lets you “share real-time maps of iRobot Roomba 960, 965, 966 and 980 missions.” 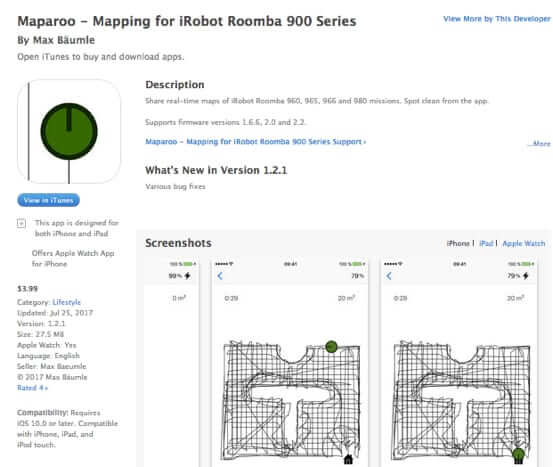 As to iRobot sharing your home map for free with third parties, oh, you have to give prior permission first, but is there anyone reading this who thinks that the permission won’t be buried somewhere in their Terms, License, or Privacy Policy? If not now, then once iRobot confirms just how sought-after that data is? Even if they can’t sell it, they never said they wouldn’t use it for leverage with other companies. In fact, remember that Angle himself talked about having “a rich map of the home that the user has allowed to be shared”, and that he expects a deal based on the sharing of those maps to be made with Amazon, Apple, or Alphabet (Google) within the next couple of years.

And speaking of their Terms, Gizmodo seems to conflate their Privacy Policy with their Terms of Service (ToS). In fact, in searching, we had a very hard time finding an actual ToS. But after quite a bit of digging, we found this page, which contains links to all of the various iRobot End User License Agreements (EULA), Privacy Policies, Data Security Statements, Terms & Conditions (T&Cs), and Software Licenses, for every country in which iRobot does business. Terms & Conditions is apparently what iRobot calls their Terms of Service.

You’ll need to go down to nearly the very end of the page to find the licenses and policies for the United States – just above those for Uruguay, and the Vatican(!).

Among that information you will find iRobot’s ‘Data Security‘ statement, which says, in part:

“How do we secure maps and map data?

iRobot considers maps of the home to be your sensitive, confidential information. Maps are protected following the industry standard guidelines to ensure the security of this data just like any other personal data. In addition to the standards mentioned above for encryption at-rest and in-flight, access to this data is tightly controlled, monitored and regularly audited. iRobot machines accessing this data have data-leak prevention software installed to ensure the data is tracked as it is accessed for use in customer support and robot improvement processes.”

Still, that doesn’t go to the matter of permission to share your home map.

We may share your personal information in the instances described below. For further information on your choices regarding your information, see the “Your Choices Regarding Your Information” section below.

• Other companies owned by or under common ownership as iRobot, which also includes our subsidiaries (i.e., any organization we own or control) or our ultimate holding company (i.e., any organization that owns or controls us) and any subsidiaries it owns. These companies will use your personal information in the same way as we can under this Policy;

• Third party vendors, affiliates, and other service providers that perform services on our behalf, solely in order to carry out their work for us, which may include identifying and serving targeted advertisements, providing e-commerce services, content or service fulfillment, billing, web site operation, payment processing and authorization, customer service, or providing analytics services. For additional information on the way in which these organizations treat your personal information, you may contact us as set out below;

• With your consent, to third parties who we think may offer you products or services you may enjoy;

• Third parties at your request. For example, you may have the option to Like or Follow us on social media and that action may be posted to your timeline, visible to your friends or followers or otherwise shared publicly.

• Other parties in connection with any company transaction, such as a merger, sale of all or a portion of company assets or shares, reorganization, financing, change of control or acquisition of all or a portion of our business by another company or third party or in the event of bankruptcy or related or similar proceedings; and

• Third parties as required to (i) satisfy any applicable law, regulation, subpoena/court order, legal process or other government request, (ii) enforce our Terms of Use Agreement {Editor’s note: If anyone can find an actual “Terms of Use” document from iRobot, we’d love to see it}, including the investigation of potential violations thereof, (iii) investigate and defend ourselves against any third party claims or allegations, (iv) protect against harm to the rights, property or safety of iRobot, its users or the public as required or permitted by law and (v) detect, prevent or otherwise address criminal (including fraud or stalking), security or technical issues.

We may also share information with others in an aggregated and anonymous form that does not reasonably identify you directly as an individual.

Now, we are sure that with all of the above, you are completely reassured that no third-party will ever be able to get their hands on the map of your home without your fully-aware consent. But just in case you want to not have the map of your home shared with iRobot, all you have to do is disconnect your Roomba from your home network.

Here's What's Up with All Those 'Do Not Sell My Personal Information' Links and Pages that are Cropp...
Roundup: Washington, Massachusetts, New York, Maryland, Rhode Island, and Hawaii All Have GDPR-Like ...
Yahoo: We Will Track You Even if Your Browser Says "Do Not Track"
How to Turn Off or Disable Location Tagging and Tracking on Facebook
What is "Dark Social" Media and Does it Matter?
Animoto Says Breached Passwords were Encrypted so Why do the Hackers Have My Full Password?
Snapchat Spanked by FTC over "Messages Disappearing Forever" Deception
State of Colorado Pandemic Unemployment System Compromised
35shares