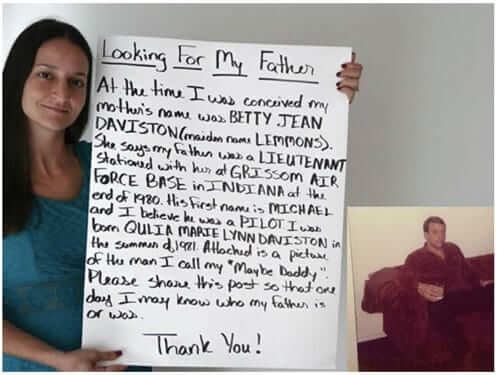 Qulia Hyman, born Qulia Marie Lynn Daviston, is searching for her father Michael. Her mother, Betty Jean Lemmons Daviston, met Qulia’s father while he was stationed at Grissom Air Force Base (AFB), Indiana, in the 80s. That is all she knows about her father Michael (pictured below), and she has turned to Facebook as her platform for attempting to find and meet the father she never knew.

Hyman, an aerial performer with the Detroit Circus, and an instructor at the affiliated Detroit Flyhouse Circus School, along with husband Bert, are hoping that this grass roots effort to find her father will gain traction and, eventually, lead to her father.

Says Qulia, “I am willing to move on if he would prefer not to begin a relationship, but I’m hoping for something more.”

And so, on Father’s Day, Hyman posted the following message on her Facebook page:

CAN YOU HELP ME FIND MY FATHER?

This Fathers Day I am asking ALL of you for your help. I have never met my father and I’m asking you to help me find him. If you or anyone you know can help me I would truly appreciate your assistance. Though I do not know his last name, I do have some usable information and a picture of him. I’m not 100% sure if he knew about me or if he has an interest in any kind of relationship. I’m not even sure if he’s still alive. I am willing to move on if he would prefer not to begin a relationship, but I’m hoping for something more.

I HAVE THE FOLLOWING INFORMATION:

At the time I was conceived my mother’s name was BETTY JEAN DAVISTON (maiden name LEMMONS). She says my father was a LIEUTENANT stationed at GRISSOM AIR FORCE BASE (now a museum) in INDIANA at the end of 1980. His first name is MICHAEL and I’m told he was a PILOT. I was born QULIA MARIE LYNN DAVISTON in the summer of 1981. My mother remarried shortly after I was born and both of our last names were immediately changed to Martin. I believe he was told about me, but he was just starting his military carrier and a baby wasn’t something he was ready for. I don’t think they were ever in any kind of committed relationship. I feel that over time peoples desires can change and I can’t help but wonder if he’s ever tried to look for me. Even if he attempted to search for me it would be challenging due to our name change. I have been given a picture of him, which I attached to the photo.

Thank you does not begin to express the gratitude I have for anyone who puts any effort into assisting me in my search.

If you think you may have some information for her, you can either visit Qulia Hyman’s Facebook page, or email Qulia here.

Facebook is Analyzing All of Your Images and Taking Note of the Contents
Facebook to Launch "FaceCoin" Cryptocurrency Bitcoin Competitor
U.S. Government in Talks with Google, Facebook, to Track Location of Where Individuals with Coronavi...
Facebook "Saved" Section for Saving Links, Videos, Events, Music, Movies and More
Why You're Seeing Ads from Facebook in Your Apps (and How to Make it Stop)
Move Over Like - Facebook Rolls Out Love, Haha, Wow, Sad and Angry as New Reaction Emoticons for Pos...
You Can be Easily Stalked through Facebook Messenger Even if You Don't Have Messenger Yourself!
Facebook Admits Conducting Research Experiments with Users Emotions: Read How
Spread the love