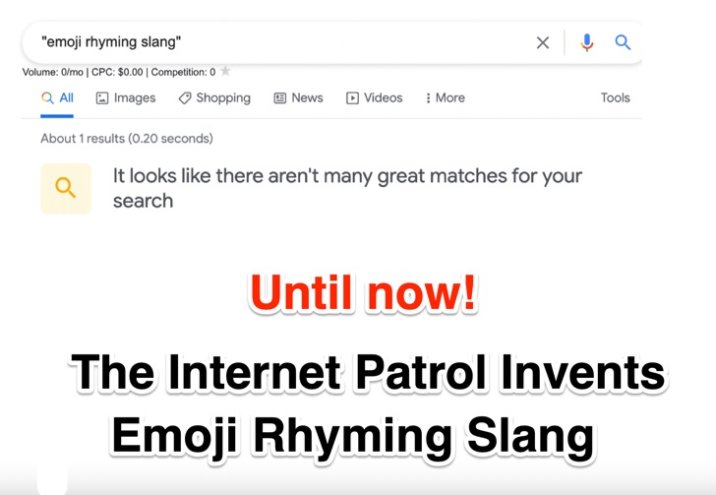 Ready to use emoji rhyming slang? It’s like Cockney rhyming slang, but with emoji! Rhyming slang has been around for ages and the best known, or rather the one that most people have heard of is Cockney rhyming slang, which has been around since at least the early 1800s. However there is also Australian rhyming slang, which was adopted by criminals and crime gangs on the west coast of the United States in the late 1800s and early 1900s. And why do we say that we invented it? Well, if you Google something and there are no results, we take that as pretty good evidence that we are the first, or, at least, the first to discuss and use it publicly.

According to Rice University, Cockney rhyming slang originated in the East End of London. According to Rice, “many of its expressions have passed into common language, and the creation of new ones is no longer restricted to Cockneys. Up until the late 20th Century, rhyming slang was also common in Australian slang, probably due to the formative influence of cockney on Australian English.”

Rhyming slang developed primarily as a way of being able to speak in public or around others when you didn’t want others around you to understand what you were saying. Sort of like Pig Latin or Gibberish, although much more effective, as instead of the words being rearranged (as in Pig Latin) or mangled (as with Gibberish) the words are replaced, usually with entire multi-word phrases. Eventually those phrases became so ‘standard’ (for Cockney rhyming slang, that is) that the phrase itself was reduced to a single word, which was understood to represent the phrase, which phrase, in turn, contained the word that rhymed with the actual word you were attempting to convey. For example, explains Rice University, the word ‘face’ would be replaced by ‘boat’ because face rhymes with ‘boat race’.” Another example is ‘apples’ for stairs, because “apples and pears” rhymes with ‘stairs’. Rice U. goes on to say that “there is no hard and fast rule for this, and you just have to know whether a particular expression is always shortened, never shortened, or can be used either way.”


That said, it is often possible to figure it out from the context. For example if you were out at a pub and asked “where is the restroom” and were told “up the apples”, you would be able to figure out that the person meant “apples and pears – stairs” because, well, it just makes sense.

Here’s how emoji rhyming slang works: let’s say that you are texting with someone, and you want to respond to their text. Instead of having to type out all of those pesky letters and words, you send a single emoji that rhymes with the gist of your response. For example, in Cockney rhyming slang you might say “apples and pears” for ‘stairs’. With emoji rhyming slang you would send a 🍐. This all started when one of us was going to send “of course” to someone to acknowledge their request, and instead – lightbulb – 🐎!

Text message: Are you there?
Response: 🍺

Text message: How’s your love life?
Response: Haven’t had a ⛸ in ages.

Text message: So how are you feeling?
Response: 🌽

Text message: Want to go out with me?
Response: Can’t, gotta wash my 🐻 (this could be shortened to just “Can’t, 🐻”, which would be truer to Cockney rhyming slang)

Got a good emoji rhyming slang (‘ERS’) emoji? Drop us a 🐐 below!

If You Get a Text Message or Phone Call about a Package Delivery Do NOT Click on the Link!
TIP on Hiatus
Updated Information about the Massive ParkMobile Data Breach
How to Direct Phone Calls From Your Android Phone to Your Windows 10 PC
Is 5G Dangerous? The 5G-Coronavirus Theory Debunked
With Kids Having Increased Online Time Here is How to Protect Them Using Free Parental Control Apps
Global Privacy Control, Will It Succeed Where 'Do Not Track' Failed?
Digital Nomad Life: What are Digital Nomads and is it Worth Leaving Your Job?
Share the knowledge

Number of people who have enjoyed this article: 61