Amber Duick was minding her own business when she suddenly started receiving a series of scary emails from a Sebastian Bowler – a stranger who seemed not only to know who Duick is, but to know how to find her. Indeed, he knew her previous address, and generally where she lives now, and, he said, he was coming to her house to hide from the police.

Sebastian Bowler’s MySpace profile supported what he shared about himself – namely that he was from the U.K., and a fan of both soccer and drink. 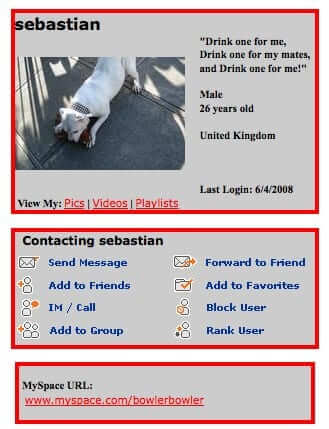 The emails from Bowler became increasingly bizarre and creepy. “Amber mate!” said one missive from Bowler, “Coming 2 Los Angeles. Gonna lay low at your place for a bit till it all blows over.”

A later message menaces a clerk at a hotel at which Bowler had stayed. “Amber, ran into a little problem at the hotel. After I’m done visiting you, I’m going to go back and sort out that front desk Muppet.” That note included a bill from the hotel for $78.92.

Amber was terrified – even sleeping with a machete by her bed and insisting that her boyfriend keep mace and a club by his side.

Terrified, that is, until she learned that it was all an elaborate marketing stunt being carried out on behalf of Toyota.

Toyota’s response? She asked for it, they say, by opting in to their marketing emails.

It all started when Toyota and their ad agency, Saatchi & Saatchi, decided to run an ad campaign in which people could have their friends “punked”.

“Pick one of our maniacs to mess with their heads for five straight days while you sit back and watch it all go down,” said the campaign.

Apparently a ‘friend’ (and we use the term loosely) of Amber’s thought that Amber needed her head messed with by one of Toyota’s maniacs.

The way to ‘volunteer’ your friend for this set-up was by sending them a link to a personality test, hosted by Toyota, called “The Other You.” Buried deep within one of the links from the test were the terms of service for the test, which included that the test taker was agreeing to receive “marketing email” from Toyota.

The emails from ‘Bowler’ were the “marketing email”.

Says Duick’s attorney, Nicholas Tepper, “My client was terrified. She slept with a machete next to her bed and she slept with mace. She could barely sleep or eat normally.”

The lawsuit which Tepper filed on Duick’s behalf says that Duick “became physically ill”, believing that “a disturbed and aggressive” stranger was headed her way, and planning on staying with her. In fact, Duick was so afraid, she contacted her friends, family members, her neighbors, and the people who live in her former residence whose address Bowler had, warning them all about this stranger who was headed their way.

Counters Tepper, “It didn’t say someone was going to be stalking my client. It was premised upon keeping my client in the dark, upon fooling her that these e-mails were real.”

Perhaps Toyota would do well to remember the case of Megan Meier, the teen who committed suicide after being harrassed by a fake male through MySpace. The ‘boy’ turned out to be the mother of a classmate of Meiers’.

Amy Strickland - Every School Board's Nightmare or Nah?
Man Thrown Off Southwest Plane for Tweeting that Gate Agent was Rude
Russian Official Tweets Racist Obama Tweet of Obamas and a Banana
Argentina Prez sends Tweet Mocking Chinese Pronunciation of Letter R While on Diplomatic Visit to Ch...
The Truth Behind New York's Ban on Tiger Selfies
Kelly Blazek's Stinging Rejection to LinkedIn Request Shared Across Internet
LifeLock Data Unlocked: LifeLock Exposes Millions of Email Addresses for the Taking
OKCupid Steps in it by Removing 'Visitors' and Pitching its Removal as a "Feature"
Share the knowledge

One thought on “Toyota Admits Terrorizing Woman with Stalking Email Campaign, Claims She Asked for It”