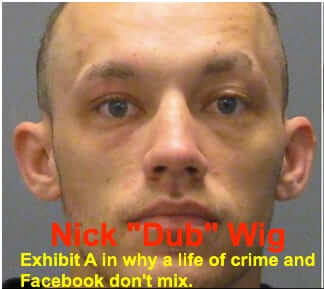 Woods, who lives in Dakota county, in Minnesota, with his son, told the police that the intruder also left a pile of wet jeans and shoes in his house (to which we can only say, “WTF?”).


When Woods got home, he was able to use Wig’s Facebook account (he goes by “Nick Dub” on Facebook) to track Wig down. Literally, because Woods found Wig, who he recognized from Wig’s Facebook profile, and who, as we have already established, is perhaps not the sharpest tool in the shed, walking around Woods’ neighborhood, wearing the watch that he had stolen from Woods!

In an interview with ABC news, a Dakota County Attorney’s Office spokesperson explained “This is a first case in Dakota County in which a suspected burglar left his Facebook profile on the computer screen of the victim’s computer.”

But we’ll bet that it won’t be the last.

Remember, in the United States a suspect is innocent until proven guilty. But they can be proven stupid right from the outset.

Full Explanation of Court Order to Apple to Unlock San Bernardino Shooters' iPhone and Apple Refusal...
What Does ?, &, or _RDR Mean in a URL?
New "4th Amendment is Not for Sale" Bill Would Ban Police from Buying Your Personal Data
Facebook "Saved" Section for Saving Links, Videos, Events, Music, Movies and More
Millions of Facebook Passwords and Other Passwords Stolen in Massive Breach by Pony Botnet Controlle...
The Whole Facebook "I Like it on the"... Explained
Bitcoin Exchange Founder Charged with Money Laundering
How to Change the Privacy Settings for Things You Share to Facebook