By now you may have read about how Tracy Turkish Brooks and her “other pussy” had an embarrassing Facebook moment when she – supposedly – posted a very steamy note to “Michael”, and accidentally published it for the world to see instead of sending it via private Facebook email.

The post, which was real enough, read “Thank you too, Micheal, I had a great time as well.I’m glad you enjoyed my OTHER pussy ;). I must admit, I haven’t had sex in a while, so getting mounted by such a strong and powerful man was a pleasant surprise after so many long months of …abstinence. I hope this message doesn’t scare you off, I just wanted you to know what a wonderful time I had with you.You are permanently invited to “the love-cave-between-my-legs” ”

However, while the post was real, by all accounts, the person who posted it was not Tracy Turkish Brooks – rather, her Facebook account was (and apparently still is) hacked.

In reality, the last time that Tracy herself actually posted to her Facebook account appears to have been several hours earlier on the same day – in the mid-morning Tracy announced that she was glad that it was Friday; she followed that up at almost 1:00 p.m. indicating that she was looking forward to the weekend:

More than four hours later, the steamy “other pussy” post hit Tracy’s Facebook page, immediately followed by “Tracy” acting embarrassed that she had accidentally publicly posted it, followed by a whole slew of comments (some razzing her, some declaiming that Tracy had written it). 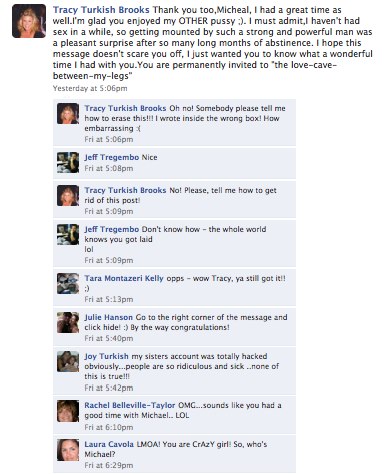 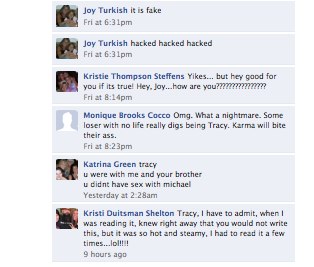 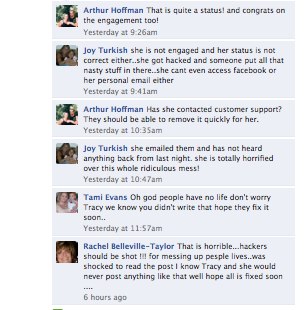 In the midst of this, the hacker also changed Tracy’s relationship and religion statuses to “engaged” and “atheist”, respectively:

According to her sister, Tracy is certainly not engaged (nor, presumably, atheist, as the hacker changed her status to that of atheist).

So, how could this happen?

The vast majority of these questions could be readily answered by anyone with whom you grew up – or anyone who is able to steer you into a conversation designed to elicit the information – allowing them to gain access to your Facebook account, change the password and lock you out, and then masquerade as you.

We can expect more and more of these sorts of incidents to happen as our society continues to become less and less concerned about and protective of our personal and private information. The “this is so cool!” factor of being able to keep your friends constantly updated as to what, how and even who you are doing, and where you are doing it, eclipses all sense of self-protection (or indeed, sense at all) when it comes to sharing that information.

Tracy is lucky that she had so many friends and family to rush to her virtual side, and to publicly decry the naughty deed as a forgery, hopefully before her employer, a potential boyfriend, or other person whose opinion could be devestatingly negatively impacted could misjudge her.

While some may laugh at the whole thing as a silly episode, with no harm lasting harm done, the underlying messages are loud and clear:

1. Use a strong password;
2. Use a different password for each site and service;
3. Use obscure, hard-to-guess password recovery hints; and
4. Don’t go sharing private information on public forums.

Number of people who have enjoyed this article: 181,146