A new iPhone and Android app, FlyRights (not FlyRight, which is confusingly another iPhone application which allows you to use social media to provide feedback to the airlines) allows users who feel that they have been the the victim of racial profiling by the Transportation Security Administration (TSA) to immediately – on the spot – file a complaint (via the FlyRights app – hence “Fly Rights”) with both the TSA and the Department of Homeland Security (DHS).

FlyRights was developed by the SikhCoaltion, with input and feedback from the National Council of La Raza, and the National Association for the Advancement of Colored People.

The idea for Fly Rights was sparked by Sikh entrepreneurs in Silicon Valley who felt they were being racially profiled. Explains Amardeep Singh, Program Director for The Sikh Coalition. “They literally said to one of our staff members, ‘There should be an app for that’. We thought, great idea, let’s start working on it.”

But, says the Coalition, Sikhs are not the only ones who get racially profiled. In November of last year, says the Coalition in a press release, there were reports of a group of TSA screeners called the “Mexicutioners” by their colleagues, who deliberately subjected Mexican travelers to additional stops at Honolulu International Airport. And in June of last year it was reported that New Jersey TSA officers deliberately subjected Mexican and Dominican travelers to extra scrutiny.

The purpose of FlyRights is to reduce the amount of pure racial profiling, versus TSA scrutiny where genuinely warranted.

Says Amardeep Singh, “For too long the TSA has kept a long leash on its screeners, telling them not to profile, but has taken no effective measures to stop it. Until that happens, we call on the public to hold the TSA accountable by downloading the FlyRights app and filing reports when appropriate.”

While TSA has not said what they think of the app, the Sikh Coalition has tested the app with the TSA and, of course, the reports from Fly Rights go directly to the TSA.

Said California Representative Judy Chu, “Every time a TSA agent singles out a Sikh American for additional scrutiny at the airport based solely on their religious appearance, it reinforces unfair stereotypes. Up until now, victims of racial profiling at our nation’s airports had no easy way to report these instances or call attention to this unfortunate trend. The Sikh Coalition’s new app changes that. Travelers now have the power to fight racial profiling and discrimination right at their fingertips. I applaud the Coalition for their work in developing this app to ensure that travelers of all backgrounds are treated fairly every time they fly.”

You can download Fly Rights to your iPhone here. 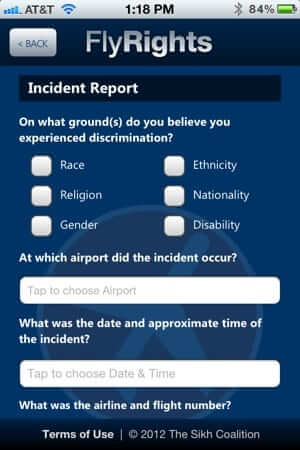 The Best Must-Have Apps for 2013
How a Meme Goes Viral, Takes on a Life of Its Own, Becomes Fake News and then Real: a Cautionary Tal...
Scientists Prove Digital Brain to Brain Thought Communication Over the Internet
What is Dalgona Coffee (Quarantine Coffee), Why is it Blowing Up Social Media, and How to Make Quara...
How to Search Online for Apps in the iTunes Store
Should You Have a Social Media Prenup and Are They Enforceable?
Can't Back Up Your iPhone Because It's Greyed Out in iTunes? Try This!
Bitcoins ("BTC") and Bitcoin Mining Explained in Plain English
Share the knowledge