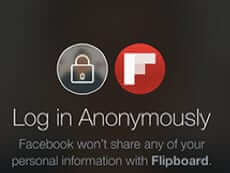 Said Zuckerberg, at the f8 conference for Facebook developers, “Today, we want to do more to put control and power back into people’s hands.”

A post by Facebook about the Facebook Anonymous Login explains that “Sometimes people want to try out apps, but they’re not ready to share any information about themselves. For this, we’re introducing a way to log in to apps anonymously. Anonymous Login lets people log in to apps so they don’t have to remember usernames and passwords, but it doesn’t share personal information from Facebook. People can decide later if they want to share any additional information, once they understand more about the app.”

Facebook is rolling Facebook Anonymous Login out slowly, starting with select apps, and then rolling it out across more apps later. So if you don’t see it available for your favourite apps yet, you may in the future.

Facebook App Scans Sex Registry for Your Facebook Friends
MySpace Comes Back from the Dead Fully Reanimated. New MySpace Site Includes Gorgeous Video and Eye-...
Does Private or Incognito Mode Make Browsing Anonymous?
How Delete a Photo from an Existing Facebook Post
How to Get Rid of Facebook Messenger Day
What Does #hmu4atbh Mean? We Explain
How to Turn Off Facebook Event Reminder Notifications
How to Make Facebook Chat Not Open Facebook Messenger on Your Phone
Share the knowledge

Number of people who have enjoyed this article: 77,005