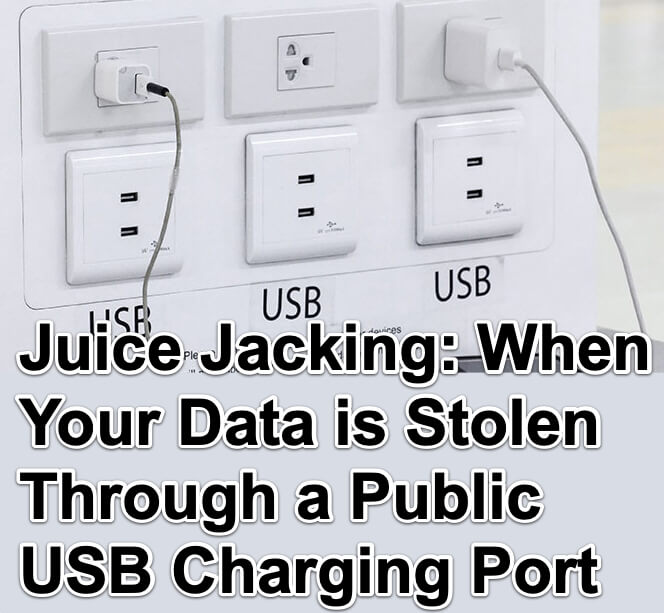 Juice Jacking: the LA DA’s office is warning about it, Snopes says it’s real, alright. But just what is juice jacking? And how real is the threat? Here’s all of the info you need about juice jacking and the threat it poses to you.

Put simply, when you connect your device to a USB port to charge it, you are actually also establishing a data connection.

So, when you connect your phone, with a USB cable, to a public USB charging port, it’s possible that someone has hacked that USB port to grab your data from your phone, or to put malware onto your phone.

That is juice jacking. Yeah, it is poorly named, because if they were actually jacking juice, it would mean they were stealing power (which probably is something that people in California need to worry about, but isn’t what the Los Angeles DA was talking about in their advisory on juice jacking).

Says the LA DA, “Travelers should avoid using public USB power charging stations in airports, hotels and other locations because they may contain dangerous malware. In the USB Charger Scam, often called “juice jacking,” criminals load malware onto charging stations or cables they leave plugged in at the stations so they may infect the phones and other electronic devices of unsuspecting users. The malware may lock the device or export data and passwords directly to the scammer.”

Now, we said that it’s possible – but how likely is it?

According to Snopes, “While it is technically possible to turn a public USB-wall port into a malicious, data-transferring outlet, the criminal practice of juice-jacking doesn’t appear to be widespread.”

Not only that but, according to Snopes, the info isn’t really new at all, and “safety features have been added to iOS and Android operating systems in order to combat this sort of crime.”

So, it seems that the current interest in and concern about juice jacking is being driven by the LA DA’s warning last week about something that isn’t a new thing, and isn’t happening in a wide-spread fashion, if at all.

In fact, in a follow-up, the Los Angeles District Attorney’s office acknowledged that, despite their warning on their website, they themselves had this many cases involving juice jacking: 0.

That said, if you believe in that old adage that an ounce of prevention is worth a pound of cure, juice jacking is very easy to prevent. Here are 4 easy ways to prevent juice jacking (note that the below Amazon links will open in a different window, and may provide a small commission to us):

1. Instead of charging from a public USB port, carry a small USB plug, and use a public outlet.

3. Use a data-blocking USB cable.

4. Use a data-blocking USB connector with your regular USB cable.

Of course, if you have your computer with you, you can also just charge your device by connecting it to your computer.

The bottom line is that the odds are pretty small that any public USB charging station into which you might plug your phone has been hacked to grab your data or to introduce malware onto your phone. On the other hand, it’s so easy to avoid even that slight possibility that why wouldn’t you?

Nearly Two Dozen Texas Towns Victims of Coordinated Ransomware Attack, Single MSP Vulnerability Susp...
Security Expert Dan Geer: We Are All Intelligence Officers Now (Full Text Here)
Microsoft Intentionally Failing to Patch Critical Vulnerability in Explorer IE 8
Multi-factor Authentication and Why You Need It
Why is Everyone Talking about Leaked Nude Celebrity Selfie Pictures?
"Why Can't I Log Into My Account When I Know I am Using the Right Password?" This May be Why
How to Find Facebook's Text Message Authorization for 2-Factor Authentication
About the Jeep Hack and Hackers Hacking Cars and What to Do About It
Share the knowledge