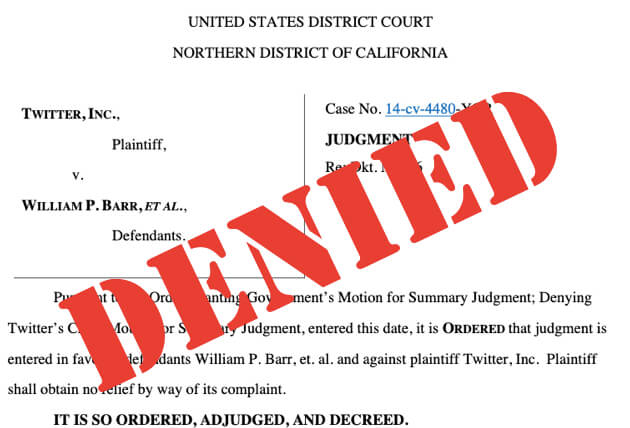 Back in 2014, Twitter filed the case of Twitter v. Holder (now amended to Twitter v. Barr) with the Federal courts, requesting that Twitter to be allowed to include in its public transparency reports the number of requests for surveillance that it received from the government in a given year. The requests, known as National Security Letters, or NSLs, are generally required to be held in secret by the company receiving them – in other words not disclosed, especially to the public.

Twitter has been posting their transparency reports since 2012. As they explain, “Twitter is committed to the open exchange of information. First published on July 2, 2012, our biannual Twitter Transparency Report highlights trends in legal requests, intellectual property-related requests, Twitter Rules enforcement, platform manipulation, and email privacy best practices. The report also provides insight into whether or not we take action on these requests.”

However Twitter has not been allowed to include any information about the secret National Security Letters that they receive each year from the Federal government in those transparency reports.

A National Security Letter works much like a subpoena; it orders the recipient organization to disclose information about individuals who are customers or users of the organization. Generally speaking, those organizations are completely gagged by the Federal government from disclosing even that they have received an NSL, let alone disclosing its contents. (For an excellent in-depth explanation of NSLs see the EFF’s National Security Letter FAQ.)

Of course, the Justice Department fought Twitter’s lawsuit vigorously over the course of the last 6 years, culminating in Federal Judge Yvonne Gonzalez Rogers, from the 9th District in Oakland, California, ultimately dismissing the case yesterday (Friday, April 17th, 2020), in a complete victory for complete secrecy.

In her opinion, Judge Rogers starts out by explaining that “This long-pending case has morphed through myriad iterations and legislative changes. That plaintiff has continued to pursue the action merely underscores the tension between the First Amendment and national security and the future impact of the proceedings.”

Given the lengthy history of this case (including amending the title of the case from Twitter v. Holder to Twitter v. Barr, owing to a change in administration), we won’t go into the back and forth, however you can read the full text of Judge Roger’s order below.

The bottom line is that the Federal government can continue to completely gag companies from saying anything about NSLs, even just that they have received them. Here’s the full text of the order in Twitter v. Barr:

What You Need to Know about Twitter's New Terms of Service and Shadow Banning, and Rights to Your Co...
Studies Show Nobody Reads Terms of Service
No Warrant Necessary for Law Enforcement to Access Data Stored in the Cloud
Justice Department Ferguson Report Now Online
It is Now Illegal to Hold a Cellphone to Your Ear While Driving in California
Federal Court Rejects Net Neutrality
Possible Yelp Shareholder Lawsuit as Stock Tanks After FTC Reveals Subpoenas and Thousands of Compla...
Amy Strickland - Every School Board's Nightmare or Nah?
Share the knowledge

Number of people who have enjoyed this article: 1,630