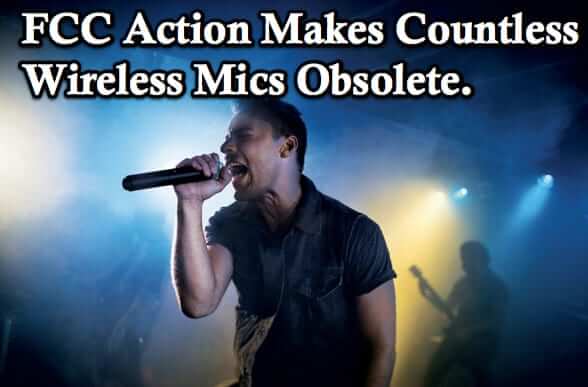 Countless organizations have found, to their dismay, that they must buy all new wireless mic equipment, or be dead in the water when it comes to their sound system, owing to a decision by the FCC. Let us explain.

Mobile broadband is a big deal. Nearly everybody and their goat has mobile broadband, by which we mean the ability to access the Internet any time, from nearly anywhere, to do email, watch cat videos, and stream our favourite shows, all from our mobile device.

How can this be? How can the demand for mobile broadband be connected to small community organizations needing to find the cash to buy new sound equipment?

The short answer is that the FCC robbed Peter to pay Paul – or, to be more precise, a few years ago the FCC issued a rule taking part of the radio frequency spectrum that was used by wireless mics, and gave it to mobile broadband.

As Wired explains in this article, “Four years ago, in an effort to bolster the country’s tech infrastructure, the FCC decreed that the portion of the radio spectrum used by most wireless mics would be better utilized for faster and more robust mobile broadband service. Now, as the telecom companies that won the rights to that spectrum begin to use it, the prior tenants are scrambling for new radio-frequency homes.”

What this means is that all of the wireless microphone equipment out there that was operating on the frequency that the FCC has transferred over to mobile broadband is obsolete or soon will be.

And that continuing to use it will be illegal.

Now, not all wireless microphones operate on those frequencies, but many do. And it isn’t cheap to buy new wireless mics, which is why this has created a dilemma for smaller venues, schools, community theater, etc..

In fact, SchoolTheatre.org has a great writeup of the issue, in which they lament “So what are schools to do? Unfortunately, not much beyond comply. Remember, failure to comply leaves you open to legal action.”

If you are buying a new wireless microphone system (or needing to), be sure that it operates outside of the 600MHz frequency, as that is the frequency impacted by the demand for mobile broadband.

Also, read this article by RF Venue which talks about how to select a wireless mic system to avoid future such problems as much as possible.

Facebook Sued, Settles, for Allowing Underaged Girl to Open Account
No Warrant Necessary for Law Enforcement to Access Data Stored in the Cloud
I'm a Patent Assertion Entity, Not a Patent Troll, Thank You Very Much
Mugshot Sites Sued for Charging for Removal of Mugshots
Hate Being Added to Email Mailing Lists without Your Permission? Now is Your Chance to Let the FTC K...
Tough New Law Regarding Selling Your Personal Data Goes Into Effect in Vermont
Hater Intentionally Causes Seizure in Epileptic Reporter with "Weaponized Tweet"; Faces Federal Char...
Social Media Uses this Trick to Extract Your Personal Data from You. DETOUR Law Would Make Using th...
Share the knowledge

Number of people who have enjoyed this article: 578