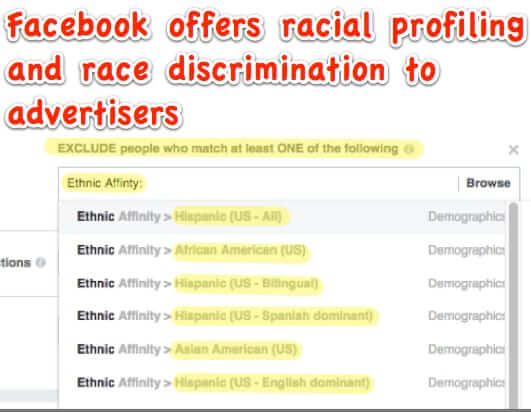 In an inexplicable move, Facebook is now facilitating and allowing its advertisers to use racial profiling in targeting their ads. They say it’s so that advertisers have the ability to exclude race groups as they test their marketing.

In an expose by ProPublica journalists Julia Angwin and Terry Parris Jr., and published by Arstechnica, Angwin and Parris demonstrated how easy it is to create a racist advertisement, and to have it approved by Facebook.

“How do you fight back if your rent is illegally high?” reads the ProPublica Facebook ad. “ProPublica and the Brooklyn Public Library is presenting a forum of people who have done exactly that. Join us on Thursday, Oct. 20, at 7:30 p.m. ET to learn more about the issues. RSVP here: http://propub.li/2eedyF6”

Until you see that in this ad (which remember, again, was approved by Facebook), they only want white people.

As we have an advertising account with Facebook, we tested this out for ourselves, just now (2:45 p.m. MTN time on 10/28/16). And sure enough, we could exclude all sorts of ethnicities, by specific ethnicity.

The racial identifiers which we could choose to exclude (or, in the interest of completeness, include) included African American, Asian American, and several versions of Hispanic, including ‘English-dominant’, ‘Spanish-dominant’, and bilingual.

When pressed for an explanation, Faceebook’s privacy and policy manager, Steve Satterfield, explained to ProPublica that advertisers need to have the ability to both include and exclude groups to test how their ads perform. He gave the example that an advertiser “might run one campaign in English that excludes the Hispanic affinity group to see how well the campaign performs against running that ad campaign in Spanish.”

However, that certainly does not explain the ability to exclude African Americans, and Asian Americans who have no similar breakdown by language in the Facebook advertising settings.

Satterfield added that “We take a strong stand against advertisers misusing our platform: Our policies prohibit using our targeting options to discriminate, and they require compliance with the law. We take prompt enforcement action when we determine that ads violate our policies.”

Which seems to fly in the face of ProPublica’s exclusionary ad being approved.

And, ProPublica very carefully selected a test ad that by most, if not all, measures was blatantly illegal, because it deals with housing, and the Federal Fair Housing Act (FHA) is about as clear as a law can be about excluding based on race.

In fact, Angwin and Parris brought this issue to John Relman, a civil rights attorney in Washington, D.C., and they relate that he gasped (their word), saying that “This is horrifying. This is massively illegal. This is about as blatant a violation of the federal Fair Housing Act as one can find.”

And, as if it makes things better, Satterfield explains that because Facebook doesn’t ask for a user’s racial background, they assign an Ethnic Affinity to each member based on their activity on Facebook!

So, will Facebook issue a mea culpa, admit that they messed up, and remove the ability for advertisers to exclude based on race, without someone having to bring a lawsuit?

We suspect that will depend on just how much revenue is generated by likely illegal, and certainly abuseable Ethnic Affinity exclusion option.

Facebook Reveals Massive Breach of up to 50 Million User Accounts
Want to Know What Happens to Your Facebook Page when You Die? This
How to Archive or Get Rid of a Facebook Private Message Now that Facebook Removed the Option in Mess...
The Amazon Prime Win a Free Kindle 3G Sweepstakes - It's Legit, But with a Catch
How to Find Birthdays in the Facebook Mobile App
How to Create a Strong Password
How the Like Button Has Changed Us and How the Internet Works
What Will Facebook do with Drones?
Share the knowledge

Number of people who have enjoyed this article: 445