Donald Trump has yet again managed to create controversy just by opening his mouth, or rather, updating his Twitter account. This time he got his behind handed to him by Chrysler Vice President Ralph Gilles for perpetuating false claims stated by Romney, when Giles told Trum – very publicly – that he was, and we qoute, “full of shit.”

Mitt Romney made untrue claims that Chrysler is moving Jeep to China, which did not sit well with many considering that Chrysler was among the automakers to benefit from the massive automaker bailouts.


Unfortunately for Romney, Gilles entered this debacle with arms swinging. Having been with Chrysler since 1992, and having personally been involved with the Jeep division, he was immediately dragged into the political wars and into crisis mode, from managing the PR fallout, to assuring US Chrysler employees that their jobs were safe.

Then came the Donald.

On Friday, Donald Tweeted, “Obama is a terrible negotiator. He bails out Chrysler and now Chrysler wants to send all Jeep manufacturing to China–and will!”

To which Ralph Gilles simply said back, “you are full of shit!” 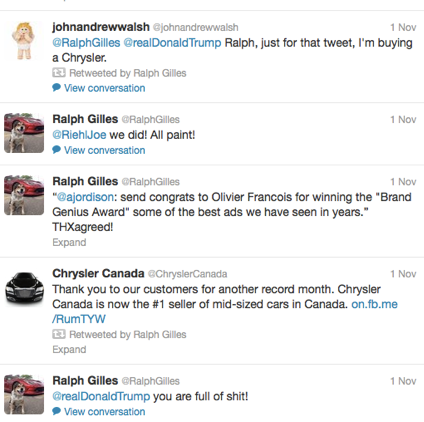 After Romney’s initial claims that Jeep was moving to China, Chrysler Group LLC Chief Executive Sergio Marchionne emailed employees saying, “I feel obliged to unambiguously restate our position: Jeep production will not be moved from the United States to China.”

Trump did fire back at Giles, saying, “Gilles of Chrysler should focus on design rather than filthy language–not very professional.”

Which, much like Trump accusing the Obamas of almost divorcing in 2000, was simply the pot calling the kettle black.

ACLU Mobile Justice App Records Police Actions as They Happen
How To Sell on Social Media by Turning Followers Into Customers
What You Need to Know about Twitter's New Terms of Service and Shadow Banning, and Rights to Your Co...
How do You Feel about Having a 'Social Score'? China Implements Social Credit Scores - Can Other Co...
What Does #hmu4atbh Mean? We Explain
Massive Internet Outage Emanating from East Coast Due to DDOS Attack - List of Sites Affected and Wo...
What is a GPO? We Explain
Searchable Full Text of Whistleblower Complaint Regarding President Trump

First Day Hands-On Review and Impressions with the iPad Mini