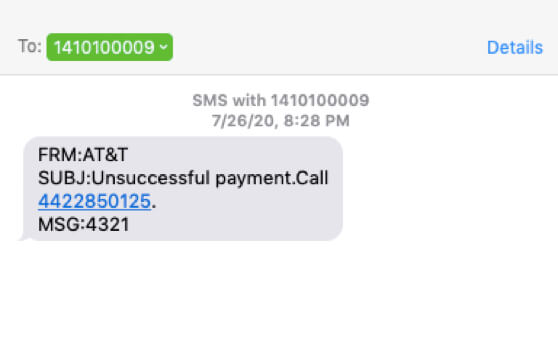 If you receive a text message that appears to be from AT&T, telling you that you had an unsuccessful payment, and to call 442-285-0125, don’t respond! 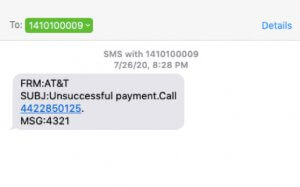 While the number from which the SMS message appears to originate, and the number you are told to call, may change, the general intent of the message is the same: your payment was unsuccessful, you need to call to fix it.

Of course your payment wasn’t unsuccessful, and you definitely not only don’t need to, but should not, call that number, whatever it is!

Hopefully by now you already know better, especially if you are a regular reader of the Internet Patrol, and so you haven’t responded and called that number, where somebody impersonating an AT&T payment agent will happily take your personal details, including, no doubt, your AT&T login information, as well as your credit card details. (We have not called the number ourselves – if someone reading this has called that number, please recount your experience for us!)

The 4422850125 number is just one of a series of numbers that these text messages say to call, even the messages coming from 1410100009 are telling the recipients to call one of several different numbers.

This is because, of course, they are generating both the number that you are to call, and the the number that they are using to call you, by either computer or online services designed just for these purposes.

In a thread over at OnlineThreatAlerts.com, people are saying things such as:

I received the same message. Suspicious because I firmly believe AT&T (or any vendor) would have contacted me via my e-mail on file – not via a private message. I immediately went to my AT&T account and found my payments were up to date and I had 0 balance. Also if you first check the information about the message without opening it, you will find a convoluted origin thread-a dead giveaway.

I received one just now, with the MSG: 4896. Super suspicious, I always go to their website. Never reply to an email or text you don’t know. Maybe someday these low lifes’ will get a real life!

I just got the same message. I checked my at&t app and it says my payment posted yesterday and it was deducted from my bank account. This is definitely a scam. I would’ve known without checking but because I received this message around the date my payment usually posts, I checked to be sure. The message was sent from 1410200516.

One commenter on that thread did call, and says that “I did call the phone number but received a recording about a “locked” debit card. At that point, I hung up.” 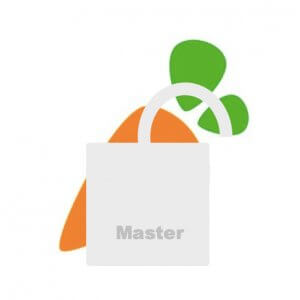 Instacart Denies Data Breach, Blames Customers, as More Than 250,000 Instacart Customer’s PII is for Sale on the Dark Web 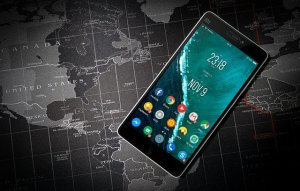