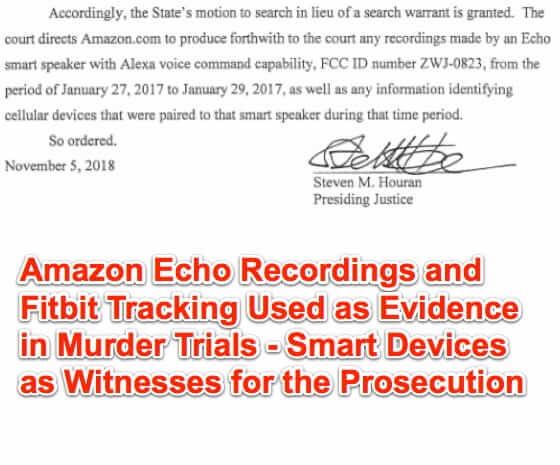 Earlier this week we wrote about what Amazon is recording and storing for their use when you talk to Alexa on your Amazon Echo device. We also told you how to delete those recordings. Today we’re going to give you some real-life examples of how such recordings are being used in criminal proceedings. And of course the same can be true for Google Home recordings, Fitbit tracking, and any other smart device that tracks your movements or records your voice (or both).

First, a quick review: as we pointed out in the article on how Amazon is recording and storing everything you say to your Echo, whenever you say the designated word to ‘wake Alexa up’ (i.e. “Alexa”, “Echo”, “Amazon” or “Computer”, depending on how you have set it up) within ‘earshot’ of your Echo, your Echo ‘wakes up’ and starts recording whatever it ‘hears’. Of course usually most of what it hears is your voice command (like “Alexa, play the Beatles” or “Alexa, what time is it?”) But when Alexa is in recording mode, it is recording everything that it can ‘hear’ at the moment.

And while Amazon has never publicly stated how long an Echo will stay in recording mode following hearing a wake word and waking up, we know from this article that it’s long enough to record an entire conversation (and then to accidentally send it to someone in the owner’s contact list).


So, with that background, one might not be all that surprised to learn that a Fitbit’s location tracking recording is featuring in a murder trial in Connecticut, and that prosecutors in two different murder trials – one in New Hampshire and one in Arkansas – have demanded production of the recordings that the defendants’ Amazon Echos had made during and around the time that the murders were committed.

In the New Hampshire case, the Echo recordings are anticipated to be introduced during the double homicide trial of Timothy Verrill in May of this year (2019). In the Arkansas case, what prosecutors found (or didn’t find) resulted in their dropping the case against defendant James Bates because, said the prosecutor, “I can’t stand in front of a jury and ask them to convict someone beyond a reasonable doubt if I myself have a reasonable doubt.” Whether this was owing to the Echo casting doubt, or to the Echo not revealing anything to tip a doubt that they already had, is unknown. The point is – there were recordings made by the Echo, and they got them.

The court order in the Verrill trial, ordering Amazon to produce the Echo recordings, says, in part, that “The State asserts there is probable cause to believe that evidence of crimes – audio recordings capturing the attack on victim Christine Sullivan that occurred in the kitchen of 979 Meaderboro Road and any events that preceded or succeeded the attack – may be found on the server(s) maintained by or for Amazon.com for all recordings made by the aforementioned Echo smart speaker.”

(You can read the full court order in the Verrill trial, ordering Amazon to produce the Echo recordings, here.)

Meanwhile, in the upcoming Connecticut trial of Richard Dabate, the murder victim (the defendant’s wife) was wearing a Fitbit that showed that her movements were not at all what her husband had claimed, but instead showed her moving around at home well after the time that her husband claimed he had found her dead, shot, he said, by a masked intruder. According to NBC News, the Fitbit “showed that Connie Dabate was moving around her house well after the time that her husband, Richard, told police that a masked intruder with a “Vin Diesel voice” shot her dead, according to an arrest warrant filed in the case.”

Now, you may be asking yourself “What does all of this have to do with me? I’m not planning on committing a murder.”

While we’re glad to hear that you’re not planning on committing murder (or, we hope, any other crime) that doesn’t negate the fact that your Amazon Echo, Google Home, or other smart device is keeping tabs on you – tabs which at some point some law enforcement agency may want to subpoena, and if they can convince a judge that the potential evidence is somehow legitimately connected to the case (not a high bar, by the way), they will likely get that subpoena approved.

And perhaps the only thing more damning than a recorded conversation that seems to put a suspect squarely in the crosshairs is a snippet of conversation from which police or prosecutors may infer their own context – while you will be hard-pressed to even remember the context, let alone explain it satisfactorily.

How to Preschedule a Gift Delivery with Amazon
Amazon Adds 'Computer' to List of Echo Wake Words - Trekkies Rejoice
Here's What the Different Shipping, Delivery, and 'Fulfilled By' Options Mean on Amazon
Hire a Goat on Amazon!
Amazon Prime Music Service: Unlimited Streaming Music and Unlimited Skips
How to Remove Skills from Alexa without Having to Go Through the App
Online Black Friday and Cyber Monday Shopping the Internet After-Thanksgiving Sales
Fake Amazon "Your Confirmation" Phishing Emails Hide Canadian Pharmacy Spam
Share the knowledge

Number of people who have enjoyed this article: 1,981