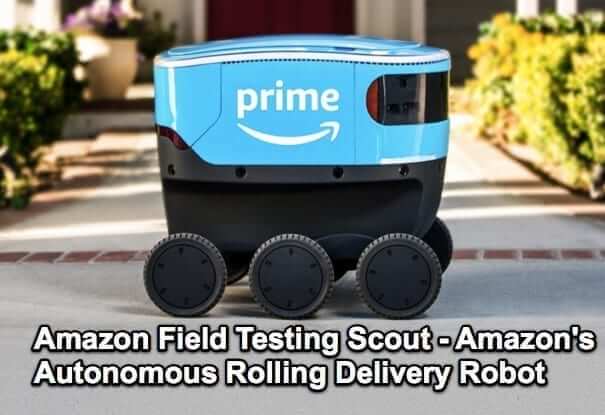 About the Amazon Scout Delivery Robot

Amazon says that Scout is about the size of a small cooler, although that’s not all that useful of a comparison, as coolers – even small ones – vary greatly in size. However, you can get a sense of Scout’s size from this picture, and also the video we have posted below.

Amazon Scout is “About the Size of a Small Cooler” 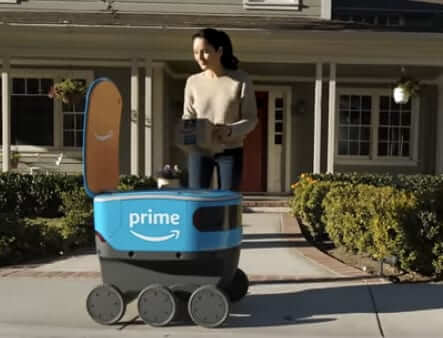 Scout rolls along at a human walking pace, which is good, seeing as how for a while Scout, even though being autonomous, will be shadowed by a human Amazonian.

With its 6 wheels, Scout rolls along and navigates sidewalks with aplomb, presumably negotiating curbs and curbcuts, although the video (again, below) doesn’t show that.

Scout is just one in a field of a half-dozen or so delivery bots in or entering the delivery space right now. Fedex SameDay Bot, Starship, Kiwi, Robomart, and TeleRetail Robot are all up and running, whether in beta or in field trials, as well.

According to the comprehensive information offered by TerkRecoms in a video covering the subject Starship and Kiwi are focused primarily on delivering food and personal care products, while the TeleRetail delivery bot is intended to help brick and mortar stores compete with the likes of Amazon, and Robomart is literally a portable grab-and-go convenience store (albeit a tiny one) on wheels. 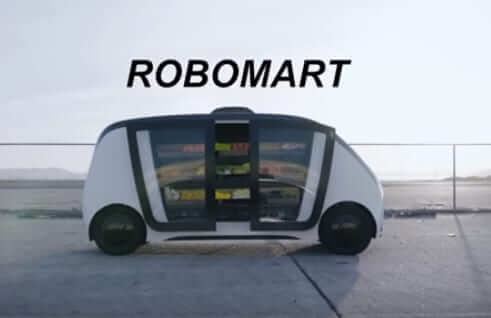 By contrast, Scout and FedEx’s FedEx SameDay Bot have been developed to address the so-called ‘last mile’ problem: getting deliveries from the delivery truck or depot to the ultimate destination.

The FedEx bot is being developed in a partnership between FedEx and Segway inventor Dean Kamen. 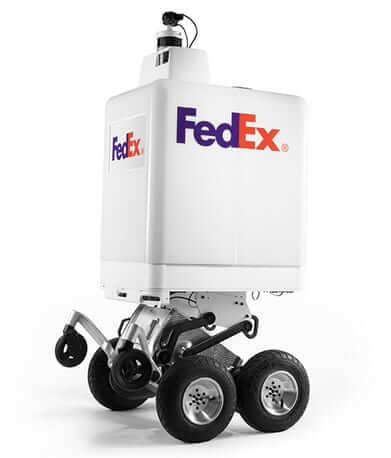 To our knowledge, at least as of the time of the writing of this article, Amazon’s Scout is the only one that is currently in actual use (in the field tests in Snohomish County).

Problems we Foresee with Scout

While the concept of an autonomous delivery robot bringing your latest Amazon Prime order to you may be cool, and certainly high tech, and arguably solves some problems for Amazon, such as not being subject to driving fatigue, or, you know, members of a union, there are a number of logistical problems that nobody seems to be talking about – at least openly. And they seem pretty obvious to us.

At the end of the day, we’re not entirely sure that Amazon Scout, like it’s FedEx SameDay Bot and other ‘last mile’ robotic delivery bretheren, isn’t more of a big boy’s toy for Bezos, et al, being developed because it’s ‘wicked super cool’, with perhaps a bit of ‘keeping up with the Joneses’ thrown in, and not because it’s at all practical.

Here is the video of Scout in action. Have you seen or even been serviced by one of these things? What is your own experience with – and opinion of – these sorts of delivery robots?

The Hidden Dangers of the Amazon Echo: Friends, Children, and Even Your TV or Radio Can Order Things...
Amazon Prime Membership Rate Goes Up to $99 per Year Next Week
Will the New Amazon Handmade Offering be an Etsy Killer?
How to Cancel Amazon Television Channel Subscriptions
How Amazon Reviewers Get Free Stuff with Amazon Vine
How to Cancel the Kindle Unlimited Service on Amazon
Amazon Workers, Instacart Shoppers on Strike along with Whole Foods Employees
Amazon Kindle Kiosk Coming to Airports and Malls
Share the knowledge

Number of people who have enjoyed this article: 782