Google news has started mining Twitter to flesh out their latest news headline results, including displaying your tweets as “latest news” mixed in with the news headlines, in a rolling marquee that does an autorefresh much like a Facebook page does.

A perfect, albeit sad, example is today’s news that actor Andrew Koenig – son of Walter Koenig, who played Checkov in the original Star Trek – was found dead of an apparent suicide, in a park in Vancouver. As thousands tweeted about the sad event, their tweets started showing up in Google News along with news headlines about Koenig.

Almost immediately, as the news spread across not only traditional and Internet media, but also through Twitter, Google News started featuring the Twittered message (tweets) about Koenig mixed in with the regular news headlines, in the Google News ‘Latest Results’ section.

Each of these screen shots were taken seconds apart, in the same section of the Google News page, as it auto-refreshed. Note the “Pause” link which allows you to pause the auto-refresh:

A headline from Pop Sugar Australia, along with a Twitter message:

Then it autorefreshes, and shows a Twitter message along with a headline from DigitalJournal.com:

Another autorefresh, and a few more Twitter messages mixed in with a headline from Des Pardes:

Click on the “Latest Results” link (in this case “Latest Results for ‘Andrew Koenig'”) and you are taken to a full page – note the Twitter message (highlighted by us with a red box) intermingled with the news headlines (highlighted with an orange box) and, again, a “Pause” link to stop the autorefresh: 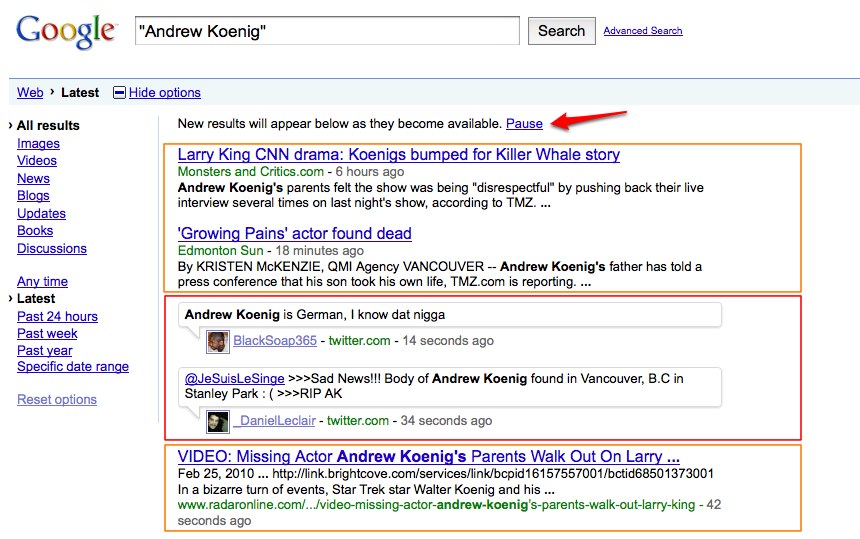 So how about it, Twitter tweeters – how do you feel about Google using your personal messages to pad out their Google News results?

How to Make a Custom Playlist URL on YouTube
How to Send Group Messages on Twitter
Gmail 'Skip the Inbox' Filter Not Working? This May Be Why - and How to Fix It
Wondering What are FANG Stocks? We Explain (Hint: They Should Now Be Called FANA Stocks)
What is "Dark Social" Media and Does it Matter?
Full Text of Google Stadia Announcement
Why the Subject Line is the Most Important Part of Your Email
How to (Essentially) Disable Google AMP in Google Search
Share the knowledge