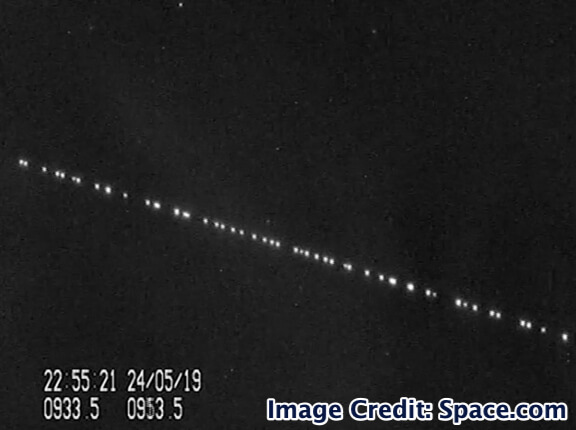 Cliff Johnson, a Northwestern University astronomer, was surveying the Magellanic Clouds – two dwarf galaxies orbiting the Milky Way – in the predawn hours of November 18, 2019, when 19 streaks of bright lights crossed into the telescope’s view. Johnson was to later learn that the shining objects were part of SpaceX’s 60-strong Starlink satellites launched by the company since May 2019. The company intends to launch 1,500 satellites in 2020 and has already sent 360 spacecrafts into the sky.

While astronomers are used to satellites passing into their view, normally the satellites appear one at a time and do not ruin observations. But when 19 satellites cross the telescope’s view, that is a different issue.
What worries Johnson more is the possibility of thousands of satellites blanketing the Earth and outnumbering about 9,000 stars visible to the naked eye.

When SpaceX launched its first bunch of Starlink satellites in May 2019, skywatchers noticed bright objects in the night sky. At the same time, astronomers started voicing their concerns about the potential of the satellites interfering with Earth-based scopes as well as the night sky, which is an international resource.

And SpaceX is not the only company intending to populate the sky with internet-beaming satellites. Amazon intends to launch 3,200 satellites, while a UK-based company known as OneWeb plans to send 650 satellites into space. There is even talk of advertising companies sending small satellites to circle the Earth to spell out names of popular brands.

While Elon Musk and SpaceX have consistently assured astronomers that the satellites would stop looking like stars once they settled into place, astronomers feel they have a reason to worry.

According to Jonathan McDowell, spaceflight expert, and astrophysicists at Harvard, scientists scouring the sky for distant objects such as the hypothetical Neptune-sized planet commonly known as Planet Nine will experience difficulties when Starlink is complete. In addition, since these satellites will be more visible at dusk, they are likely to pose a major challenge to scientists hunting for large asteroids headed towards Earth, says McDowell.

In the face of piling pressure from astronomers and nature enthusiasts, SpaceX promised to mitigate the brightness of the satellites. The company coated one of the satellites they launched in early 2020 so as to make it less visible in the sky. Astronomers keenly following the developments measured the reflectivity of the new satellite and found the efforts to reduce the brightness were partially successful.

Jeremy Tregloan-Reed from the University of Antofagasta in Chile says “It does appear that the special darkening treatment has worked, we’re detecting roughly a 55 percent reduction in the reflective brightness of DarkSat compared to other Starlink satellites.”

While early results from the study on the darkened satellites conducted in February and March 2020 show promising results, there are still many concerns about the impact of the satellites to astronomy.

Number of people who have enjoyed this article: 983