Ok, so if you find that the tweets of people whom you don’t follow on Twitter are somehow showing up in your Twitter stream, what’s happening is that someone whom you do follow has retweeted that person.

So why is that retweet showing up as if the original author of the tweet is someone whom you are following, when you aren’t actually following them?

This is a function of how the retweeter’s (the person you are following) Twitter client passes the retweeted message to Twitter, although at this point we’re not sure whether it’s something Twitter has intentionally enabled for some or not.

Here are some examples of how this can look – this is from my actual Twitter timeline on my web browser: 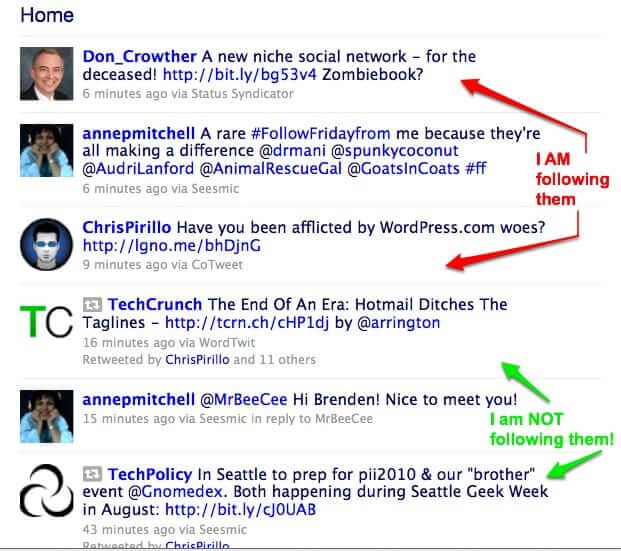 Even though I am not following TechCrunch or TechPolicy, they are showing up in my Twitter timeline as if I were, with their icon (avatar), not that of the person who is actually retweeting them (in this case Chris Pirillo).

As you can see, in my Twitter client, Twhirl, I don’t even see those ‘interesting’ forms of retweets at all – Chris Pirillo’s retweets of TechCrunch and TechPolicy don’t even show up. 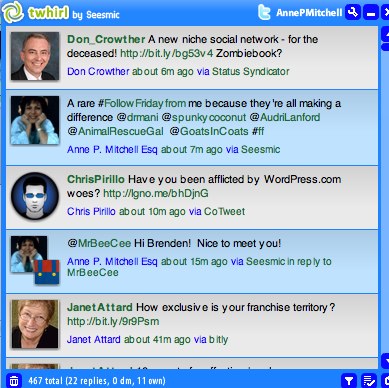 Now here is what a normal retweet in my timeline, but not by Chris, and not for TechPolicy or TechCrunch, looks like.

Now, the most likely explanations for this are that in the web view (which is what Twitter can control, unlike the view in 3rd-party Twitter applications) Twitter has arranged either for high-profile users, such as TechCrunch and TechPolicy, to show up in users’ timeline when retweeted, or that Chris Pirillo has been given that near-god-like power when he retweets something. However, a note to my buddy Chris, and his response, suggests that the latter is not the case (or if it is, Chris wasn’t aware of it, and Twitter – or TechCrunch and TechPolicy – really should be paying him).

Twitter did put a notice of new retweeting formats up on the site some time ago, but they never mentioned a “you’ll see the (re)tweets of people you don’t follow as if you did follow them” ‘feature’, and frankly, we don’t like it.

People also searched for Posts showing up on my wall from people I don’t follow, How does my Instagram say I’m following people I never followed, i see tweets from pages my friend follows, most of the people i follow arent showing up in my twitter feed, twitter highlights people i dont know, why are random people i dont fillow on my following, Why does someone I don’t follow show up in fm on Twitter, why is my pinterest following people i didnt follow

Cool Photo Editing Apps That Makes Your Phone Pictures Standout
Social Media Campaign for Kidnapped Nigerian Girls Using Photos of Wrong Kids
We Explain Why People are Saying "Tainted Meat" All Over Facebook and Twitter
Elected Official Puts the "Weiner" in, Uh, Weiner
First Rule of Office Affair: Turn Off the Lights and Stay Away from the Windows
Are App Icons Giving Us Cognitive Overload As They Fight For Our Attention?
Twitter Removes 140-Character Limit on Direct Messages
The Social Movement Known as "Black Twitter"
Share the knowledge