If you’ve been wondering about the Microsoft Zune MP3 music player, and in particular if you have been wondering how much it will cost and where you can buy it, wonder no more. Because Walmart accidentally (or not?) leaked that information earlier this week.

The Zune MP3 player was listed on the Wal-Mart site for $284.00 for the 30Gig Zune, along side its picture.

Said a Walmart spokesperson, “This price was incorrectly and inadvertently listed at Walmart.com.”

But was it really? There has been some hype around the Zune, which Microsoft sees as and hopes to be a competitor for the iPod. And in this era of information “now you see it now you don’t”, it’s easy to imagine an intended “accidental leak”. It’s harder to imagine publishing that sort of info truly accidentally on a site with the background and magnitude of Wal-Mart. Not impossible, but hard.

In any event, if you were wondering how much the Zune is going to cost, it appears to be about $284.00.

Amazon now carries the Zune! Check out the Zune at Amazon (click the picture below): 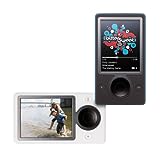 One thought on “Where Can You Buy a Zune and How Much Does it Cost? Ask Walmart!”