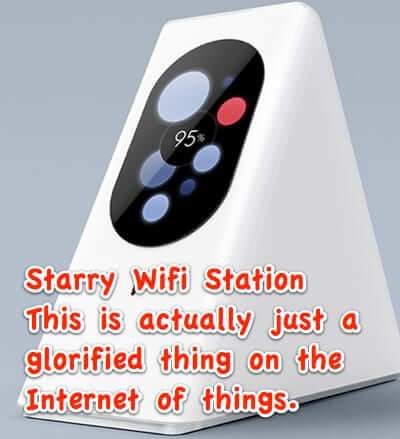 If you run in certain circles, you may be hearing people swooning over the Starry Wireless Internet appliance and service. “Starry is a radical new Internet service!” “The Starry router requires no cable, no contract, no technician.” Starry “will revolutionize how we connect to the internet.” “When you move, you just take it with you!” Not so much, at least not yet.

The Starry system includes (well, will include) Internet service, the Starry Point Beta (the router, which will, at some point in the future, connect to the Starry Internet service), and the Starry Station, which is the cool-looking wedge-shaped thing. And ‘thing’ is exactly the right term for it, as the reality is that the Starry Station device is nothing more than a glorified thing on the Internet of Things. In fact, it’s a 349-dollar thing, that allows you to glance at a screen to see what devices are connected to your home Internet, and to control and schedule access, etc.. Just like you can already do through your router’s interface.

But more about that in a moment.

Starry’s real value is their planned Internet service, which they promise will be faster, cheaper, and more reliable than any other. Right now they plan to test it in Boston this summer, and have plans to (and have applied to the FCC to be able to) test in 15 other cities, including Seattle, Denver, Los Angeles, San Francisco, Detroit, and Washington, D.C..

As they explain on the Starry site:

“We created the world’s first mmWave active phased array technology specifically for consumer Internet communications; the foundation for Starry Internet. Our system takes underutilized high-frequency spectrum and gives it new purpose. Using our proprietary technology, we’re building a nationwide wireless broadband network capable of delivering maximum speeds of up to a gigabit of Internet service to your home.”

But it’s not available yet. Which means that even if the router were available, it wouldn’t work.

So what do you get for that $349? Not much that you don’t already have.

In fact, the Starry Station is basically a replacement for your router’s interface: now instead of pulling up your router’s interface on your computer to check on your system, to control and schedule Internet access for your daughter’s phone and your son’s iPad, you can add a whole new appliance, with a tiny screen, to do the exact same thing. 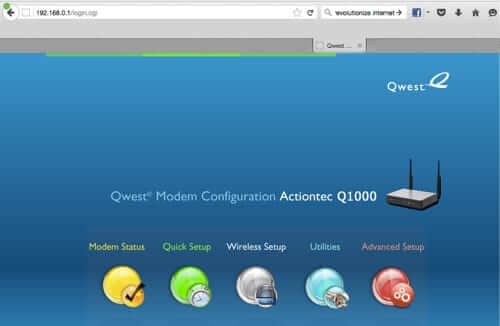 Frankly, it is beyond us why anybody would pay $349 for a gadget that will do all of the same things, things that you rarely wanted to do anyways, through your router interface.

Control and Schedule Internet Access by Device on Router 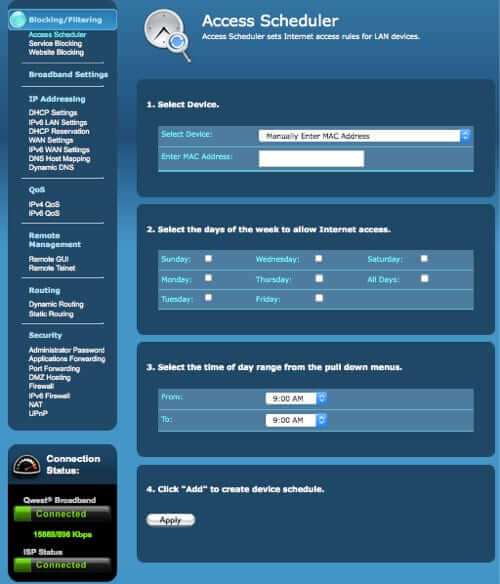 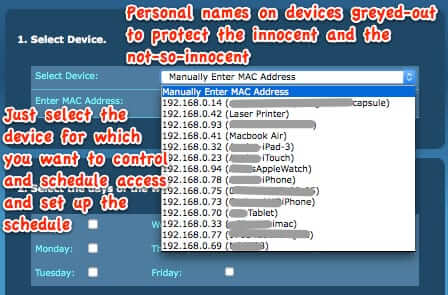 Now, what we thought the Starry system would do was allow us to cut the cord. Because that’s what they say.

But it turns out that the Starry router is just like any other router (except it’s not available yet). 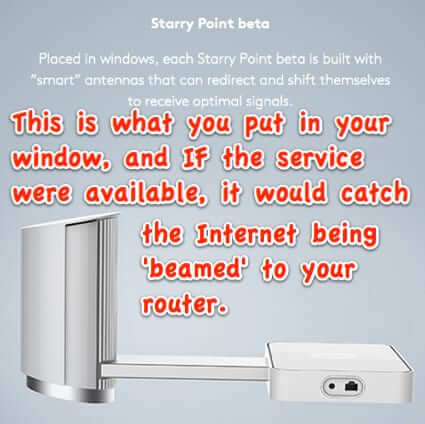 Once it is available, you stick it in your window, and it does indeed get the Internet beamed to it from the mothership. From the mothership to your router in the window. That is the cord they are talking about cutting. So that instead of having to have Comcast or Qwest or whomever provide your Internet, you can get it directly from Starry instead.

Here are Starry’s responses to our questions, in preparation for writing this article:

Thanks for writing. Right now, Starry Station does not bring automatic access to Starry Internet. You’ll still need an Internet connection through your Internet Service Provider.

At this time, we don’t have specific information on pricing of Starry Internet to announce, but we will as we get closer to rolling out our Beta service in Boston this summer. We’re very focused on affordability and introducing choice in markets where more than one option does not exist.

Regarding your second question: No, this isn’t meant to be a portable device for the coffee shop. Starry will bring Internet to your home, and you’ll need a Starry Point beta device to bring the signal from Starry Beam indoors. Regarding your third question, Starry Station has no SMTP software on it, so wouldn’t be at risk of being an MTA relay.

Even though Starry Station doesn’t bring Starry Internet with it yet, we still think it’s a great device! Starry Station’s 802.11ac technology gives you reliable, lightening-fast Wi-Fi, while its MIMO antenna and beamforming technology offer exceptional audio and video streaming performance. Intelligent learning features help you understand what’s happening with your Internet connection and all the devices on your network; Starry Station even runs dynamic speed tests and lets you determine if you’re getting the speed you’re paying for. When a device is having an issue, Starry Station identifies it and suggests solutions, so all the devices on your network are performing at their best. And its touchscreen display makes all the information you need easily accessible.

And, a follow-up clarification from Starry:

You can’t bring Starry Station to the coffee shop with you. There’s more Starry gear required to use Starry Internet, and this would need to be set up in your home.

The IP address is going to be assigned by your ISP. Sorry if I wasn’t clear in my last email–Starry Internet is not available yet. Starry Station is meant to replace your current router and it will work with your current ISP.

In case that information from Starry still isn’t clear, it’s critical to understand that the cute little wedge-shaped Starry Station does not have anything to do with providing you with an Internet connection (which is why you can’t bring it down to the coffee shop downstairs and have it work, like you can, say, a baby monitor).

The Starry Station is just an intermediate device to display data, and to interact with that information (such as scheduling when the kids can have Internet access on their devices and when they can’t), and that is all that it is.

Now, we get that not everybody knows that they can log into their router’s interface and do the exact same thing, using the exact same information that the Starry Station does.

And yeah, the Starry Station does have that cool new gadget smell.

But until the Starry Internet service is up and running, and the Starry Point router is available, and the Starry system is proven to be as fast, cheap, and reliable as they claim it will be, this feels more like a product either for people who have more money than they know what to do with and just have to have the latest gadget, or for people who just don’t want to learn how to log into their router interface at 192.168.0.1.

Massive Transcontinental Internet Outage as Three Undersea Cables Severed - Again.
Yes the .Sucks Top Level Domain is Real
The Best Free Online PDF to Text Converter
Yahoo Chat Rooms: You Must Be Over 18 Now
How Will the Comcast Time Warner Merger Affect Me?
Your Deepest Secrets are Not Safe with Your ISP
FCC Investigating CenturyLink Outage - Says "Unacceptable"
AT&T, Sprint, T-Mobile, Verizon Down Across U.S. - March 31, 2020
Share the knowledge

2 thoughts on “What’s the Big Deal about the Starry Internet Device? Not Much. At Least Not Yet.”

Number of people who have enjoyed this article: 3,822