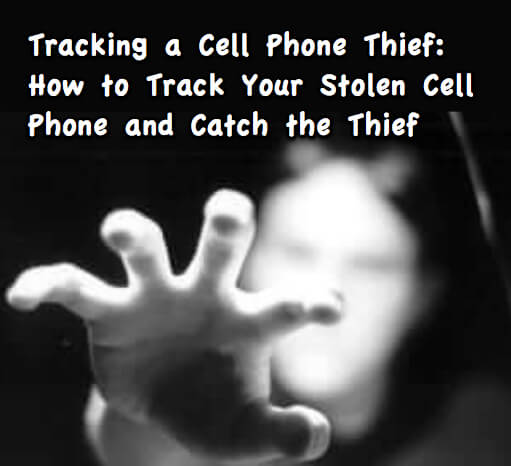 That article gives a lot of great general information, and it concludes with advising that you be sure to have your cell phone provider turn your cell phone off if you believe it to be stolen.

This is still good advice, but there is one situation in which you may not want to have it turned off right away, and that is the situation where the thief is using your cell phone to make and receive calls, and/or to send and receive text messages.

Let me tell you a story – a true story – of someone who is facing jail time right now because during a burglery they stole a cell phone. And, as their victim declared, they had messed with the wrong person.

Now, as it happens, the person to whom that cell phone belonged happens to work in the Internet security industry. And so they knew that if that thief was using their cell phone, that they would be creating a trail. So the first thing they did when they discovered that the cell phone had been stolen was to call their cell carrier, and ask “have there been any calls or text messages made with this phone since the time it was stolen?”

And, as it happened, there had already been several calls made.

Now, I know all this because that person was me. That’s right, my car was broken into, and among other things that were stolen was one of my cell phones.

And, as I said, they had messed with the wrong person.

So, when my cell carrier, upon hearing that my phone had been stolen, urged me to let them cancel the service, I refused.

Because I knew this guy was creating a perfect trail through which the police would be able to track him down. And I was going to give him enough rope to hang himself. Every time he made a call – or sent a text message – with my phone, he was creating another link in the chain that was going to lead back to him.

So instead of letting them shut the phone service off, I had them leave it on through the following night, and I spent the entire night reviewing all of the call records – the records of each and every call and text message he’d made since first stealing the phone.

I was able to do this because my carrier has an online web portal which shows your current billing, line by line – including all numbers to which calls and texts are made, or from which they are received – in real time.

In all, the thief contacted about a dozen different individuals using my phone. By the time the next morning arrived, I’d been able to construct a timeline of every single call and text he’d made – and to whom (I did this using a service to which I have access that will (for a fee) tell you to whom a phone number is registered).

That following morning I walked into the police station to file my report, and handed them 5 pages of details, including a timeline showing every single call and text he’d made or received and when, how long each call lasted, and to whom each number was registered.

From there it was a simple matter for the police to follow up with the individuals to whom each number was registered.

I’m sure those people didn’t appreciate their friend implicating them like that, and they were happy to tell the police exactly who had made those calls and sent those texts to them.

And he has now been charged with theft and felony trespass, and is facing hard jail time.

Now, a couple of things to bear in mind:

1. Leaving your phone up and running if it has been stolen can be risky, which is why in our What to Do if you’ve Lost Your Cell Phone or Your Cell Phone is Stolen article, we advise that you have your stolen phone turned off, and why all of the cell carriers will urge you to do the same. So you really have to weigh the risks versus the benefits, and this will depend entirely on several factors, such as how much personal data is on your phone, your phone plan, and more.

2. If you decide that you want to attempt to trace your stolen cell phone like this, the first thing to do upon realizing that it has been stolen is to determine if it’s being used to make calls and text messages. All of the major carriers have websites that will allow you to log into your account and look at the calls that have been made. If it’s not being used, there’s no point in leaving it up and running. Also, if you have banking, other financial information, or other sensitive information, on your phone, don’t risk leaving your phone turned on. Have it turned off – but do ask your service provider to first tell you if any calls have been made on it since the theft, so you can get that information before having it turned off.

3. Even though as an attorney I had access to the service which will tell you to whom a phone number is registered, that service is available to anybody willing to pay for it. The service I used (and no, this is not an affiliate link) was ReversePhoneDetective.com.

If you are reading this article, the odds are good that you have had your cell phone stolen. We hope that this helps you to bring some resolution to your situation, however you decide to pursue it.

37 thoughts on “Tracking a Cell Phone Thief: How to Track Your Stolen Cell Phone and How to Catch the Thief”

Number of people who have enjoyed this article: 51,945