Toshio Yamamoto is a man who knows his ramen, and we’re not just talking that cheap American Oodles of Noodles stuff. And everyone else’s ramen too. The 49 year old engineer eats ramen 5 days a week, and records his reviews of each one for ramen posterity’s sake on his website.

In fact, he recently cut down his ramen consumption from seven days a week to five because, says Toshio, “For one person to chase a single theme over a long period of time is a very special thing. I feared that, if I continued at that pace, I would get bored.”


Apparently ramen five days a week, however, is not boring. All the more impressive when you consider that Toshio Yamamoto has been cataloguing ramen for at least 5 days a week for the past 15 years!

Yamamoto’s database now contains his comments on over 4000 brands of ramen.

“When I think about all the people even on the opposite end of the globe who are eating instant noodles at the same time as me, it really makes me feel connected beyond borders,” says Yamamoto.

You can see all of Yamamoto’s ramen reviews at his website at I-Ramen.net. While his site is in Japanese, we have linked to the English translation via Google Translate. 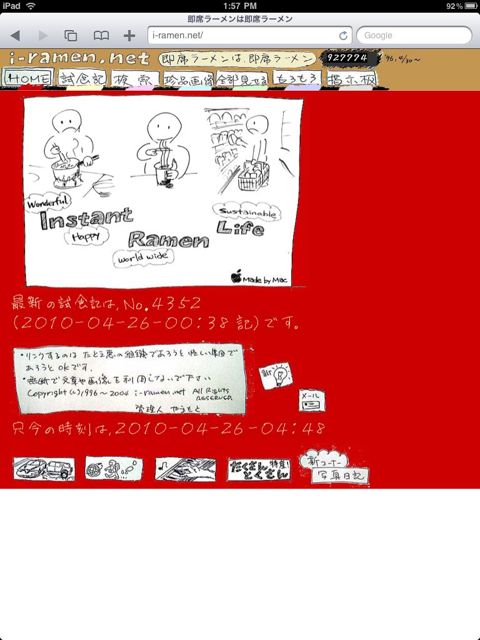 Hackers Target WHO Amidst the Covid-19 Pandemic
Russian Flying Bear Airport Logo Sparks Viral Meme Madness
UK Passes Law Making Domestic Violence over Social Media a Crime
Love Letter from Canada to the U.S.: The #TellAmericaItsGreat Hashtag and Internet Video Campaign
Facetime with Your Plants! (And Water Them from Anywhere)
Google Barges Cause Sensation - What Do They Want with a Google Barge?
All the Facts and Full Text of United Airlines Apology as Removal Video Goes Viral around the World
Technology Helping in the Fight Against The Coronavirus

Got Email Saying to Call “*47” to Reach Highway Patrol in an Emergency? Here’s the Truth About It.