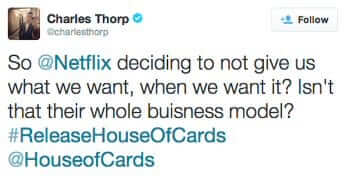 Ever since viewers binge watched season one of Netflix House of Cards, they have been eagerly awaiting the release of the second season.  The good news was that that second season was guaranteed as Netflix made the wise decision of locking up two seasons of production when it ordered the initial episodes of the hit show. 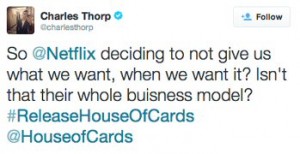 Recently Netflix announced the release date of House of Cards’ second season.  It was to come out at midnight PST on Friday, February 14 (3:00 AM for those on the east coast.)  When we initially heard that date, we thought it was a touch strange to release it on Valentine’s Day.  Clearly Netflix knew what they were doing and had their reasons but we also couldn’t help but think that there would be more than a few dateless men and women whose significant others were at home binge watching House of Cards rather than being romantic.

Nonetheless, there were no complaints (at least that we heard about) concerning the Valentine’s release date until this week.  With a “historic and catastrophic” snowstorm bearing down on the east coast, many residents from Atlanta to Boston were looking forward to a snow day.  And what better way to spend a day than by burning through 13 new episodes of Netflix House of Cards?

So, it was suggested by some that Netflix should release the show a day early to accommodate those who would be stuck at home.  With Netflix already accounting for a third of all internet traffic during peak hours, what would a bit more bandwidth going in Netflix’s way matter?

While we’re not sure who initially suggested the early release date for House of Cards, the idea quickly took off.  The press secretary for Florida Senator Marco Rubio tweeted “If/when DC shuts down for blizzard Thursday, Netflix would be smart to make new ‘House of Cards’ available one day early.”  Ironically the senator’s office didn’t have its constituents in mind as Florida was unaffected by the ice and snow, but it could be argued that an early release would be a win for everyone.

Dozens of people took to change.org in order to sign a petition to get Netflix to release the show a day early.  Alas, the effort was for naught as Netflix refused to budge.  It’s possible that there were technical reasons why they couldn’t push the release date up, or maybe even legal reasons why.  A company spokesman suggested that fans spend the day off re-watching season one in preparation for the midnight release.

Of course this didn’t go over well with some fans who have become accustomed to getting what they want, when they want it.  Film reporter Charles Thorp tweeted: “So Netflix deciding to not give us what we want, when we want it? Isn’t that their whole business model?”

Nevertheless, we assume that people won’t dwell on this for long.  With a three day President’s Day weekend looming for many people, our bets are that many will be calling into work Friday with aching backs or sniffles due to shoveling the day before.  And after that, let the binge watching begin!

Do You Have to Wear Eclipse Glasses to Watch the Solar Eclipse on TV or Online?
LG Smart TV Spying on Users
Netflix Purity Commitment Ring Keeps Partners from Binge Watching without the Other
Urban Movie Channel is the New 'Black Netflix'
How to Sign Up for Dish Network's Sling TV Internet Television
The Aereo Supreme Court Decision in Plain English
AT&T Rolls Out Live and Streaming TV on Mobile Devices
Share the knowledge

Number of people who have enjoyed this article: 1,292