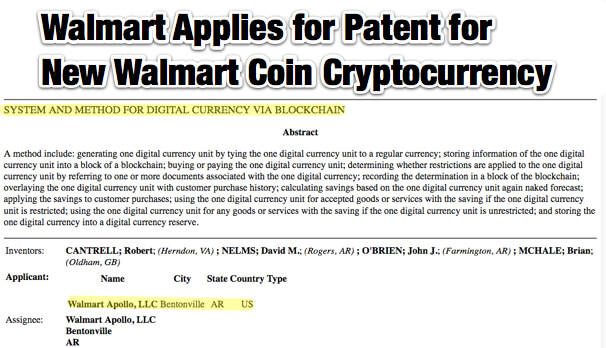 Walmart, through its joint venture Walmart Apollo, has filed a patent for a Walmart coin based on blockchain. The new cryptocurrency (“Walcoin”, anyone?), intended to be a stablecoin, is revealed in Walmart Apollo patent application 62624721.

A stablecoin is basically a cryptocurrency coin designed to be stable in terms of its value; in fact it can be backed by an asset that is held in reserve to keep the coin stable, assets such as gold or silver or other currency. In other words, what’s old is new again (a coin backed by a reserved asset), the difference being that it doesn’t exist in tangible form. In fact, in simple concept it’s not unlike the government taking an existing coin (such as the quarter in the U.S.) and saying “from now on this coin will exist only as a cryptocurrency.”


The Walmart coin patent starts out by laying out the basic description of the coin:

As justification for the Walcoin, the Walmart patent goes on to say that “The Blockchain-based system and method of providing digital currency may further provide some advantages. For example, many people are from low-income households where credit can be a problem and carrying cash can be problematic. Keeping and accessing cash can be expensive for low income households simply because those customers may live week to week and may have little cash in their bank accounts–if they have bank accounts. The cost of having little money is high because of frequent short-term borrowing, accumulated interest on short-term borrowing that becomes long-term, high bank fees proportional to wealth, high credit card fees, and high payday loan interests, all of which can take money away that could be available–and would be used–to buy necessities. Providing digital currency based on blockchain may overcome the drawbacks associated with the low-income househlods.”

Hrrm…where have we heard that before? Oh yes! Facebook’s claims about their own digital currency, the Libra!

Perhaps the biggest difference between Facebook’s Libra and Walmart’s proposed digital currency is that with the Walmart digital coin the user can earn interest on their Walcoins; with the Facebook Libra any interest earned goes back to Facebook’s Libra partners.

Bitcoins ("BTC") and Bitcoin Mining Explained in Plain English
Bitcoin ATMs Go Online While Colorado Rolls Out Its Own Currency
Is Facebook Aiming to Become a Cryptobank with Facebook's Cryptocurrency Libra and Cryptowallet Cali...
Buy, Sell, and Pay with Bitcoin Through Your Paypal or Cash App Account!
What is Blockchain and Why is it in the News Now?
Are Bitcoins Property or Currency for Tax Purposes? The IRS Rules Explained
Facebook to Launch "FaceCoin" Cryptocurrency Bitcoin Competitor
5 Rising Social Media Platforms to Watch-If You Are Business Minded
21shares