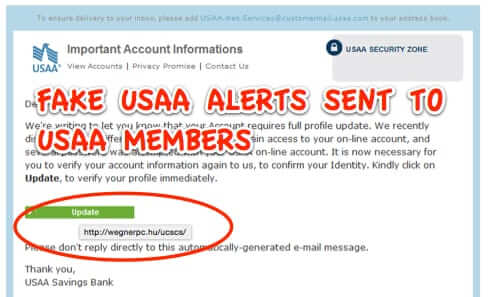 Members of USAA insurance and banking programs have been receiving email that appears to come from USAA (which stands for United Services Automobile Association), but which are actually phishing scams. The scam email comes from the nonexistent domain usaaservice.com (such as from “USAA.ServiceAccount@usaaservice.com”).

While it is unclear when and exactly how the scammers obtained the email addresses of the members, and we could find no announcement of USAA being hacked, USAA members have been complaining of being hacked over on the USAA member forums.

So far, most of the complaints have been of USAA member debit card and bank accounts being impacted (with some members saying that their accounts were wiped out), and in at least some cases the criminals had in their possession all of the credentials necessary to appear to be the account holder and to get full access.

“The criminal called again stating they had been in a wreck and needed to get cash to pay the expense out of pocket, again denied. They then somehow accessed my on-line account and I am told they were able to answer 3 of the 4 security questions, my SSN#, my PIN, and my phone password so the request was granted and they then proceeded to wipe me out in 8 increments of around $640 and one at over $400.
– BTX, 06-02-2016

The spoof email from USAA appears to come from “USAA.ServiceAccount@usaaservice.com” (the real USAA sends from “usaa.com” – the domain usaaservice.com doesn’t actually even exist as of the time of this writing), and the samples we’ve seen bear the subject line “Member Service Mail Alert”.

But perhaps the most immediately telling thing about this scam email is that it contains no text at all, it’s just one big image (legitimate companies never – or at least should never – do that). 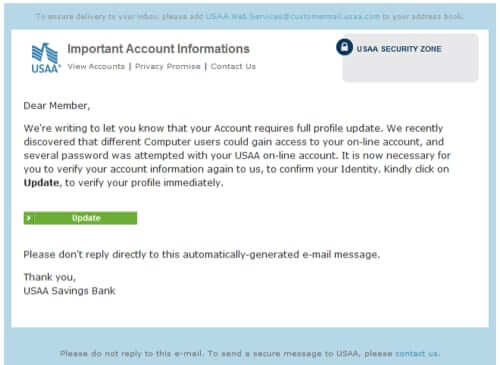 But here’s what happens when you hover over any part of the image – including the “links”, which they want you to click: 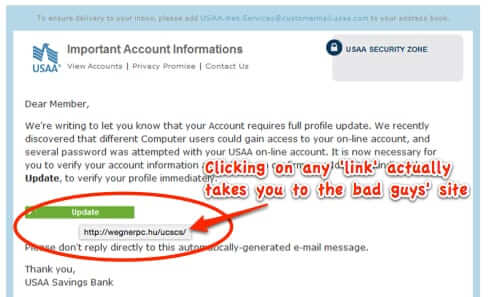 Of course, wegnerpc.hu is the scammers’ site. (.hu is the top level domain for Hungary.)

Here’s what an actual USAA notice, which will come from a subdomain with usaa.com as the primary domain, such as customermail.usaa.com or mailcenterusaa.com, looks like: 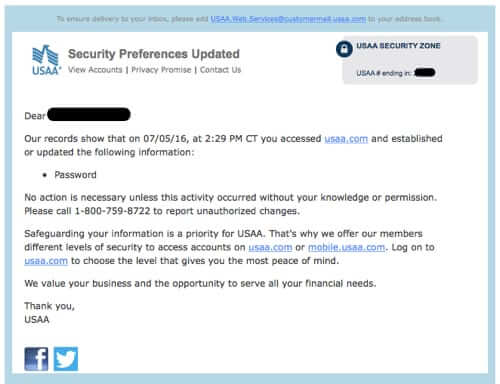 As is always, always the case, when you get an email from a company asking you to log in to your account, always, ALWAYS go directly to the site in your browser and log in, instead of clicking on any links in the email.

The Netflix Text Message Scam
How to Report Scammy Facebook Ads on Facebook
How to Unsubscribe from All GoFundMe Emails
The Once and Future Spam King: Scott Richter Files Bankruptcy on Microsoft, But Don't Count Him Out...
SpamAssassin Wins Top Anti-Spam Product Award
Daily Show's Rob Corddry Interviews "King of Spam" Scott Richter
Rumours of Facebook Charging $2.99 a Month a Hoax
What is Neighbor Spoofing, Why People Fall for It and How to Thwart It
Share the knowledge

Number of people who have enjoyed this article: 3,006