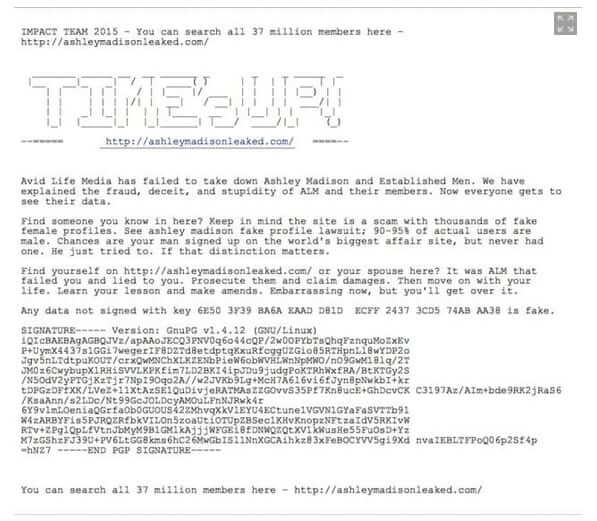 As we told our readers last month, the ‘have an affair and cheat on your spouse’ website Ashley Madison was hacked, and information on their “37,765,000 anonymous users” was grabbed by the hackers, who call themselves The Impact Team. Now the Impact Team has dumped and revealed all of the data online, and many people are worrying “Is my email address in the Ashley Madison data?”

Originally the Impact Team shared just some of the data, to prove that they really had it. They had a list of demands which included the closure of both the Ashley Madison site, and the related Established Men site. 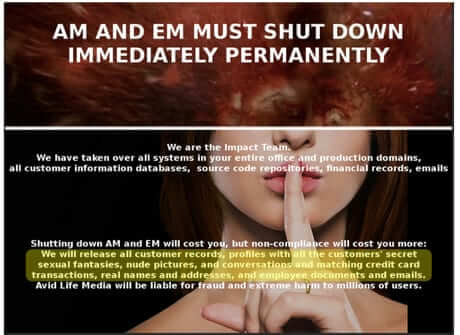 However, Avid Life Media, the parent company behind both Ashley Madison and Established Men, refused to fold. And so earlier this week the Impact Team dumped the entire data, making it available for download through a site called AshleyMadisonLeaked.com (the site – which was first registered and created on July 24th – has since been taken down).

Nearly all of the download options to find the data have been taken down, but not before people had downloaded the data more than 100,000 times.

Here is an important point to remember! Just because an email address appears in this data does not necessarily mean that the person associated with that email address actually opened an account on Ashley Madison. In fact, Ashley Madison is exactly the sort of site which leads people to use fake email addresses when they sign up – or somebody else’s email address so that it’s a real address, just not theirs (one more reason to do email address confirmation before allowing someone to open an account at a site). In fact we know of at least one person to whom that exact thing happened – let’s call him Joe. Somebody used Joe’s email address to sign up for Ashley Madison – and so Joe’s email address is part of the Impact Team’s data dump, even though Joe has never been on the site, and in fact none of the other data for that account is remotely connected to Joe.

In response to this week’s leak of the full Ashley Madison data, Avid Life Media released this statement:

Last month we were made aware of an attack to our systems. We immediately launched a full investigation utilizing independent forensic experts and other security professionals to assist with determining the origin, nature, and scope of this attack. Our investigation is still ongoing and we are simultaneously cooperating fully with law enforcement investigations, including by the Royal Canadian Mounted Police, the Ontario Provincial Police, the Toronto Police Services, and the U.S. Federal Bureau of Investigation.

We have now learned that the individual or individuals responsible for this attack claim to have released more of the stolen data. We are actively monitoring and investigating this situation to determine the validity of any information posted online and will continue to devote significant resources to this effort. Furthermore, we will continue to put forth substantial efforts into removing any information unlawfully released to the public, as well as continuing to operate our business.

This event is not an act of hacktivism, it is an act of criminality. It is an illegal action against the individual members of AshleyMadison.com, as well as any freethinking people who choose to engage in fully lawful online activities. The criminal, or criminals, involved in this act have appointed themselves as the moral judge, juror, and executioner, seeing fit to impose a personal notion of virtue on all of society. We will not sit idly by and allow these thieves to force their personal ideology on citizens around the world. We are continuing to fully cooperate with law enforcement to seek to hold the guilty parties accountable to the strictest measures of the law.

Every week sees new hacks disclosed by companies large and small, and though this may now be a new societal reality, it should not lessen our outrage. These are illegitimate acts that have real consequences for innocent citizens who are simply going about their daily lives. Regardless, if it is your private pictures or your personal thoughts that have slipped into public distribution, no one has the right to pilfer and reveal that information to audiences in search of the lurid, the titillating, and the embarrassing.

We know that there are people out there who know one or more of these individuals, and we invite them to come forward. While we are confident that the authorities will identify and prosecute each of them to the fullest extent of the law, we also know there are individuals out there who can help to make this happen faster. Anyone with information that can lead to the identification, arrest, and conviction of these criminals, can contact [email protected]

In the meantime, divorce attorneys across the country are almost certainly gearing up for a really great holiday season.

Equifax Data Breach Settlement: What to Expect if you Submitted a Claim
My Friend Cayla Doll, Other Toys, Hackers' Delight and Parents' Nightmare
Paris Hilton's Sidekick Hacked - Data Posted to Internet
Is Your Computer Complicit in Online Extortion?
Adult Friend Finders, Cams.com and Penthouse Accounts Among Massive Hack and Data Leak
About Gmail's "Warning: We believe state-sponsored attackers may be attempting to compromise your ac...
Nearly 100 Arrests Worldwide in Blackshades RAT (Remote Access Tool) Sting
How to Create a Strong Password