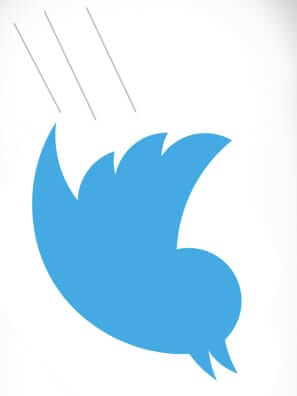 What constitutes a lousy honeymoon? For some people it is a rainy week at a resort. For others it means that everyone on their cruise ship got sick or food poisoning. And for one unlucky fellow recently, it meant getting shoved off a cliff by his bride. Well, Twitter’s stock value honeymoon ranks somewhere in that range between food poisoning and murder. (Although we’d still place it far above than Facebook’s botched IPO.)

Back in November, Twitter went public to a lot of fanfare, not unlike fellow tech giant Facebook. Unlike Facebook, Twitter actually did ok to start. For comparison’s sake, Twitter rose 73% from $26 at IPO to $44.90 soon after. Facebook began with tech glitches and then Facebook promptly lost money. If Twitter’s honeymoon is now over after a few months, the only logical comparison to Facebook would be instead of a honeymoon, they sprained sensitive body parts carrying their bride over the threshold and then spent the honeymoon with a bag of ice on their groin.

But anyway, back to Twitter. After rising 73% in its early days, Twitter closed fiscal year 2013 by reporting a $645 million loss. Ouch! But that’s where all of this starts to get confusing and frankly unless you’re a stock person, it doesn’t make a whole lot of sense. While we’re technology people here, we suspect that Wall Street is really just making up these financial rules as they go along.

Whatever the case truly is, Twitter stock has dropped recently because certain indicators say that it isn’t worth as much as other people said it was worth a couple of months ago. Or to put things another way, after investors have dumped billions of dollars into Twitter, they are suddenly wondering how Twitter is supposed to make money.

Clearly some people just like to buy into a big technology company with the expectation that it will take off and see explosive growth. After all, who wouldn’t love to have bought Apple or Microsoft stock back in the 1980’s? Reality says that those types of stocks probably aren’t going to appear again though. Once Facebook and Twitter hit the open market, they were known commodities. Sure, they have the ability to grow and gain users and come out with products that will bring great profits. But unless they invent the Twitter/Facebook version of the next Office or iPhone, they’ll just see incremental growth.

And that is probably at the heart of analysts stating that Twitter’s stock is already over their honeymoon period. If you follow stocks, you’ll notice that it appears that there is just no pleasing some people. Yes, it’s true that Twitter lost over $600 million. Likewise, their 241 million monthly active users fell short of predictions. But if you’re a glass-half-full type of person, you’ll note that analysts expected worse numbers. They actually expected a loss of 2 cents per share on revenue of $218 million. Instead, what they got was a profit of 2 cents per share on revenue of $243 million. For whatever reason, this caused the stock to drop more than 8% on Friday.

So while analysts are disappointed and are declaring Twitter’s honeymoon to be over, we think that maybe they had too great of expectations for their honeymoon. Maybe they were looking for Miss Universe and instead just ended up with Miss Arkansas?

Twitter Allows Employees to Work from Home Indefinitely
Twitter skipping rent, selling office equipment
What is "Dark Social" Media and Does it Matter?
What the #TheEmptyChair Hashtag is All About
Are App Icons Giving Us Cognitive Overload As They Fight For Our Attention?
What Does #hmu4atbh Mean? We Explain
Elected Official Puts the "Weiner" in, Uh, Weiner
Amazon Adds Affiliate I.D.-Embedded "Twitter This" to Amazon Associates Toolbar
Share the knowledge

Number of people who have enjoyed this article: 2,724