We love it when we can report on an altruistic and novel use of social media. As any but the least sentient beings know, Spain has hit really hard financial times, with unemployment at a record 25%. Spanish soccer club Real Oviedo has fallen on particularly hard times – in fact, they are facing bankruptcy, with a tax bill of nearly $2.5million (US) looming in the next several weeks. But thanks to some enterprising, and socially-savvy fans, and club management thinking outside the box, Real Oviedo may have a second chance.

That’s when social media and fans kicked in. Thanks to the initial tweeting by Spain-based British sports journalist, Sid Lowe, who created the Twitter hashtag #SOSRealOviedo, people from all around the world are purchasing the shares, and the club has already raised nearly all of the funds they need to service the tax debt. 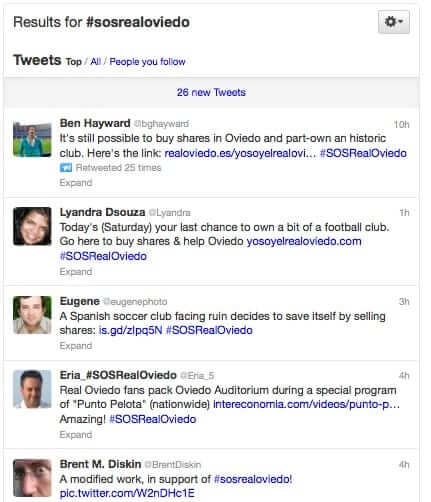 Fellow Spanish soccer club Real Madrid has pledged to buy 100,000 euros worth of shares, and a fan in Oregon even pledged to get Real Oviedo’s logo tattooed on her body if others brought 100 shares. Here’s that tattoo:

According to reports, nearly 40% of the people who purchased shares live in countries outside of Spain – 60 different countries in all, with 20,000 new shareholders.

Says Pedro Zuazua, a member of Real Oviedo’s board, “We are living in a remarkable moment in the history of Real Oviedo. We were desperate. We thought the club was going to disappear.”

Not, apparently, if Twitter and social media-connected sports fans have anything to say about it!

Technology Helping in the Fight Against The Coronavirus
Justine Sacco and the Most Unbelievable Twitter Tweet of 2013
Is The Internet Changing Our Brains?
Hot or Not, the early-Internet Dating Website that Helped Shape Social Media as We Know It Today
Stop Using Internet Explorer Immediately, Warns Homeland Security
What is a Selfie Stick, and Do You Need One?
Twitter Removes 140-Character Limit on Direct Messages
Judge Orders Man to Stop Using AllCaps in Email to Children
Share the knowledge

Number of people who have enjoyed this article: 1,443