Stories are swirling over a girl named Emma who allegedly committed suicide on Christmas eve, 2008, as the result of some Facebook status update messages aimed at her. The status update messages directed at “Emma” are indeed horrible (see image below), however, there is doubt that a girl named Emma actually committed suicide on Christmas eve, or at all, even though a Facebook fan page entitled “Teenager committed SUICIDE because of THIS status update – Leaked from 2008” would have you think otherwise. However, the story does match quite closely the suicide of Phoebe Prince, which occurred this January.

The question of whether someone named Emma was on Facebook in 2008, and committed suicide as a result of Facebook messages to her, is raised by a relatively new Facebook fan page, entitled “Teenager committed SUICIDE because of THIS status update – Leaked from 2008”. The Facebook fan page was created, it claims, to raise awareness of cyberbullying and to put a stop to cyberbullying.

The page has an image of the alleged messages, with a strategic section crossed out, saying that you have to “BECOME A FAN TO SEE FULL PIC”.

(Our image below shows the full set of messages, with nothing crossed out.)

This is known as a “squeeze” in marketing parlance, however it’s rather unusual on a Facebook fan page (not unheard of, but unusual – especially for such a supposedly altruistic effort). 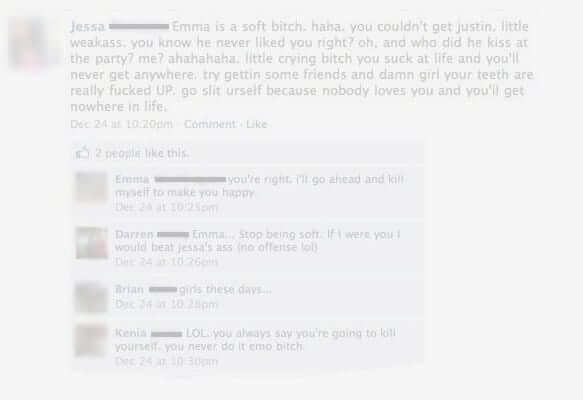 Here is the interesting bit: The page claims that this happened in 2008. However, if you look at the image, you can clearly see that two people “liked” the messages (gave them a Facebook thumbs-up).

So, almost certainly this entire thing is a hoax.

In addition, if you search for any of the sentences shown in the image, Google finds nothing at all. That’s unheard of for Facebook status messages, which are indexed very quickly by Google. It’s possible that these were messages within private accounts, but if a girl named Emma had actually committed suicide over a year ago over these messages, you can be sure the messages would be posted somewhere that Google could find it.

This all adds up to the Facebook page claiming “Teenager committed SUICIDE because of THIS status update – Leaked from 2008” being a hoax, at best, and a trap at worst. (On the other hand, the story of Phoebe Prince is all-too-real. Phoebe committed suicide this Janary after being tormented by several classmates, much of it on Facebook. Nine teens and juveniles are now facing charges for her death.)

What do we mean by trap?

Given the questionable nature of the page, it’s not out of the realm of possibility that this page will play on your heart strings to get you to click on the “join” link, only to download a Facebook virus to your computer.

Our advice? Avoid this page. If you want to do something about cyberbullying, check out sites like Stop Cyberbullying.org instead.

Number of people who have enjoyed this article: 156,117