By now everyone has heard about the weekend verdict in the Steubenville Rape case: Two teen Steubenville High Big Red football stars, Trent Mays and Ma’lik Richmond, charged with the rape of the 16-year-old girl known as “Jane Doe”, and the posting of related images on social media, were found guilty of the charges. What many don’t know, however, is that KnightSec, a branch of the hacking group Anonymous, outraged by what they saw as a cover-up, played a role in bringing the online materials to the attention of prosecutors and the court. And that the Ohio Attorney General is calling for a grand jury to force the sixteen other teen witnesses to divulge what they know about who else was involved.

While some accounts of the timeline differ, they all agree that Anonymous was instrumental in bringing to light a video, and pictures that had been posted on Instagram, detailing the abuse of the girl, who was from a nearby West Virginia town, and who was so drunk that she was passed out, and referred to in some text messages as “dead”.

Shortly after the release of the video, and in response to the belief that the high school, and the town itself, was involved in trying to cover the incident up and protect their football players, over Christmas break Anonymous hacked the Steubenville High School Big Red website, replacing the home page with their own image, video and text, warning that if the cover-up persisted, they would start releasing the personal information of those they knew to be involved. To prove that they meant it, they included the names and phone numbers of some of those involved. 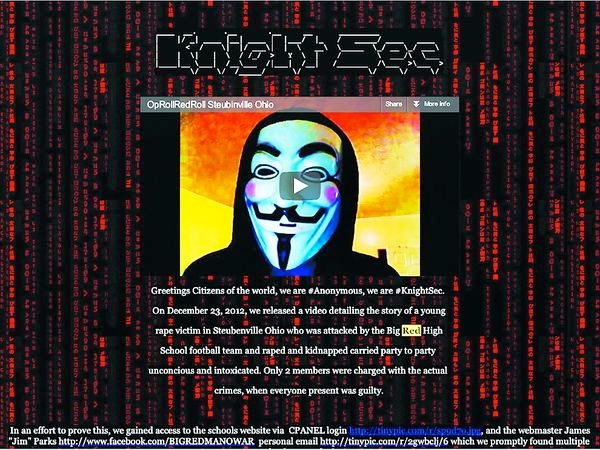 Screen capture of hacked Big Red site, which reads “Greetings, Citizens of the world, we are #Anonymous, we are #KnightSec. On December 23, 2012, we released a video detailing the story of a young rape victim in Steubenville Ohio who was attacked by the Big Red High School football team and raped and kdnapped carried party to party unconscious and intoxicated. Only 2 members were charged with the actual crimes, when everyone present was guilty.”

The video says, in part:

Greetings citizens of the world we are Anonymous we are KnightSec. Around mid-August two thousand twelve, a party took place in a small town in Ohio known as Steubenville. At this party are a list of men named in the preliminary docs below who took part in the kidnapping and rape of a fifteen-year-old girl. This video is to document the proof for the masses. The town of Steubenville has been good at keeping this quiet and their star football team protected. Their school website shows how high the football team is held in regards to education with no links to academics whatsoever. Even the founder of the school website, Man-o-war, offers his opinion here. enough with the hyperbole. “How can she be scarred for life if she supposedly can’t remember anything?” On this fateful night a life was changed forever as a group of the football players of Big Red high school dub themselves “rape crew” and began taking advantage of an underage girl. The girl was sexually assaulted, molested, raped and drug unconscious from party to party. This is a warning shot to the school faculty, the parents of those involved, and those involved especially. A preliminary docs is being released on some of those involved, while a full-size docs of everyone involved including names, social security numbers, addresses, relatives and phone numbers is being compiled as you watch this video, on every single member of the football team, those involved, the coaches, the principal and more. This docs will be released unless all accused parties come forward by New Year’s day and issue a public apology to the girl and her family. Make no mistake, all you need is a Google search engine to realize we are serious and what we do. You can hide no longer. You have attracted the attention of the hive. We will not sit idly by and watch a group of young men who turned to rape as a game or sport get the pass because of athletic ability and small town luck. You now have the world looking directly at you.

The video then goes on to name names.

The culmination of the video of the teens, and the picture from Instagram, along with the transcript of all of the text messages exchanged between the teens that night, is the guilty verdict against Mays and Richmond.

But, what about the other sixteen?

With Anonymous’ help, and the grand jury, the truth may still out.

Here are the videos, the picture, and the text messages. 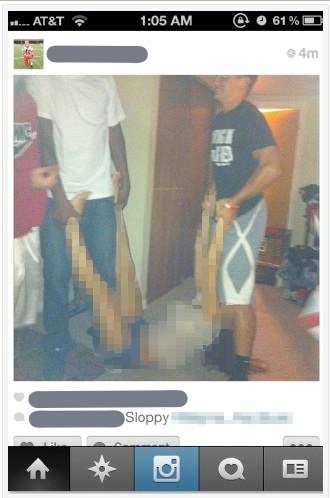 The Video Made by the Steubenville Teens

(Names have been redacted except for Mays. This is just the beginning of the texts, to read the rest, see link at the bottom.)

Person A to Trent Mays: I’m comin with where u at?

Person A to Trent Mays: wait for me lol

Person A to Trent Mays: Where u at? Where’s she?

Trent Mays: Still at Person D’s but why?

Person A: How dead is she?

Trent Mays: Not at all. She’s lookin for her phone.

Person A to Trent Mays: That shits probably long gone in the streets by now. What did u do with her?

Person B to Trent Mays: Did u do it?

Trent Mays: No lol. She could barely move.

Person B: I wanna see the vid of u hitting her with your weiner.

Trent Mays: I don’t know who took it lol.

Person C to Trent Mays: What was the deal with (her)?

Trent Mays: What you mean lol

Person C: What did u guys do lol

Trent Mays: Nothing. It was just me, Person D and Person F.

Person C: Did u fuck her?

Person G: I had fun also

Person H: Was that on the couch downstairs lmao

Trent Mays: She is

Person C: Shoulda moved her around and got a better angle

Person D: Why are you sending pics around?

Person D: Quit sending that around

For a complete transcript of the text messages that were admitted into evidence in court, go here.

Sony PlayStation Network Hack Settlement Payout Announced for PSN Subscribers
Do You Still Have to Follow GDPR after Brexit if You are in the UK? Yes
Snapchat Spanked by FTC over "Messages Disappearing Forever" Deception
Warrants for Google Account Info on All Mobile Devices in a Given Area Now Being Served on and Respo...
Are Bitcoins Property or Currency for Tax Purposes? The IRS Rules Explained
You May be Owed Money from Paypal in Class Action Settlement for Improper Holds, Reserves, and Suspe...
San Bernardino DA Suggests "lying dormant cyber pathogen" on Shooter's iPhone
Pet Sitting Company Sues Customers for Posting Negative Yelp Reviews
Share the knowledge

Number of people who have enjoyed this article: 2,268