Wow, it must really suck to be a student in Pennsylvania (at least the south-eastern part of it). First Montgomery county’s Merion school district spies on its students, now we find out that right next door, in neighboring Bucks county, they hire teachers who hate their students, and blog about it! Witness the tale, and blog, of one Natalie Munroe. Natalie Munroe is a high school teacher who clearly has even less respect for her students than they have for her. 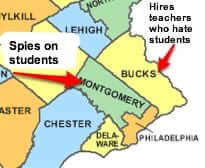 You may have already seen the rote-reporting of this story, with the now-tired quotes from Munroe’s blog in which she says about her students such gems as “Frightfully dim,” “Rat-like,” “Am concerned your kid is going to open fire on the school,” “Seems smarter than she actually is,” and even a direct “I hate your kid.”

But while Munroe’s blog has been shut down, we here at the Internet Patrol have ways of making the Internet talk, and so here are some really choice quotes from Ms. Munroe herself:

The first semester of this school year, when I had a parade of whiny, entitled kids run to the guidance department to tell on me for giving them the low grades they earned on their shoddy papers, sort of scarred me…

On April 8th last year, something Munroe didn’t like about her day was that:

The fact that the jerk who was out 3 days around our last major assessment because his family took him on trip to Puerto Rico and then emailed me all of this nonsense about how he shouldn’t have to take the test on time because he was “excused” for those days, was out again today (the date of another assessment) because his family took him to the effing Master’s golf shit over Easter break.

While something that she really liked was:

Here are some more choice quotes:

“teenagers are complete asses. There’s no respect for adults, for authority, for teachers. Parents won’t allow anyone but themselves to discipline their kids, but THEY don’t do any disciplining either. For this reason, teens come to school and talk back, think it’s appropriate to try to go into my desk to retrieve a hackey-sack that was confiscated during use in class, and say things like, “What do you think that proves?” “

She also doesn’t reserve her public scorn just for her students:

“I am obliged to wake up just 14 more times this school year and trek to work. 3 of those are half days (2 days of finals and graduation day); 1 of them is a full day without students (thanks a lot to central admin for making us go in when the students are done the preceding Friday. ASSHOLES.)”

Do you think Ms. Munroe was surprised to be suspended by the very administration that she branded as “ASSHOLES”?

And the quotes that are making the rounds are actually taken from Munroe’s master list of comments she’d like to be able to put on a student’s report card:

Thus, for this blog, I will list the comments I’d like to see added to the canned comment list, as an accurate reflection of what we really want to say to these parents. Here they are, in no particular order:

* Concerned your kid is automaton, as she just sits there emotionless for an entire 90 minutes, staring into the abyss, never volunteering to speak or do anything.

* Seems smarter than she actually is.

* Has a massive chip on her shoulder. {Ed Note: Umm…pot…kettle..}

* Too smart for her own good and refuses to play the school ‘game’ such that she’ll never live up to her true potential here.

* Has no business being in Honors.

* A complete and utter jerk in all ways. Although academically ok, your child has no other redeeming qualities.

* Shy isn’t cute in 11th grade; it’s annoying. Must learn to advocate for himself instead of having Mommy do it.

* One of the few students I can abide this semester!

* There is such a thing as too loud in oral presentations. We shouldn’t need earplugs.

* Nowhere near as good as her sibling. Are you sure they’re related?

* I won’t even remember her name next semester if I see her in the hall.

* Asked too many questions and took too long to ask them. The bell means it’s time to leave!

* Has no business being in Academic.

* Just as bad as his sibling. Don’t you know how to raise kids?

* Whiny, simpering grade-grubber with an unrealistically high perception of own ability level.

* One of the most annoying students I’ve had the displeasure of being locked in a room with for an extended time.

* Am concerned that your kid is going to come in one day and open fire on the school. (Wish I was kidding.)

* I didn’t realize one person could have this many problems.

* Your daughter is royalty. (The Queen of Drama)

* Unable to think for himself.

* I hear the trash company is hiring…

* Utterly loathsome in all imaginable ways.

* I called out sick a couple of days just to avoid your son.

* There’s no other way to say this: I hate your kid.

These comments, I think, would serve me well when filling out the cards. Only, I don’t think parents want to hear these truths.

A little over a year ago, Munroe wrote that she was “being a renegade right now, living on the edge and, um, blogging AT work. However, as I’m blogging about work stuff, I give myself a free pass of conscience.”

An interesting rationalization, to be sure, particularly given the things she was saying about work, while on work’s dime – which is, of course, the taxpayer’s dime.

Now, it may be that you can understand Munroe’s frustration with the quality of the product (high school students) delivered to her after their eight or so years in our public school system. Or maybe not.

But if nothing else, one would hope that those hired to teach our children would a) be more understanding and tolerant, b) be more compassionate, and c) be smart enough to know not to publicly blog about how they really feel.

In any event, Munroe has been suspended pending an investigation by the school.

On a related note, Ms. Munroe is, at the time of this writing, about 7 or 8 months pregnant, so it may well be that she couldn’t care less about being suspended (one may presume with pay) – or, perhaps she’ll pull the disability card, and threaten to sue the school district for discrimination. One never can tell with the sort of person who takes a job they had to know they will hate, and then complains about it.

Note: Some links on this site are partner links. This means that the Internet Patrol will earn a small commission if you purchase through our partner link, at no extra charge to you. This helps keep our site free for everybody. Thank you for your support!

Google Facilitating Link Farms with Own Adsense Ads
State Department Forced to Remove Blog Post about Trump's Mar-a-Lago (We Have it Here Though!)
Kelly Blazek's Stinging Rejection to LinkedIn Request Shared Across Internet
Burgler Uses Victim's Computer While in Home: You Won't Believe What He Did Next!
LifeLock Data Unlocked: LifeLock Exposes Millions of Email Addresses for the Taking
ShutterFly Delivers Bundle of New Baby Spam
Why GoDaddy is in the Dog House with Their "Lost Puppy" Superbowl Commercial
Man Thrown Off Southwest Plane for Tweeting that Gate Agent was Rude
Share the knowledge

12 thoughts on “High School Teacher Who Publicly Blogged Nasty Remarks About Her Students Suspended (Including Full Quotes from Her Blog!)”

Number of people who have enjoyed this article: 11,208