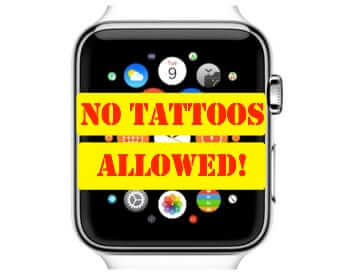 It turns out that the much awaited Apple Watch malfunctions and doesn’t work if you wear it with a tattoo! Being dubbed #TattooGate, one might be surprised at just how many folks sporting tattoos have also ordered Apple Watches. The inked are apparently a market segment that Apple failed to consider when designing the Apple Watch.

The problem first came to light when Reddit user guinne55fan posted about the problems he was having with his Apple Watch.

Said guinne55fan in his inital post, “So I thought my shiny new 42mm SS watch had a bad wrist detector sensor. The watch would lock up every time the screen went dark and prompted me for my password. I wouldn’t receive notifications. I couldn’t figure out why especially since the watch was definitely not losing contact with my skin. also I couldn’t find anything online with people experiencing this issue. I was about to give up and call Apple tomorrow when I decided to try holding it against my hand (my left arm is sleeved and where I wear my watch is tattooed as well) and it worked. My hand isn’t tattooed and the Watch stayed unlocked. Once I put it back on the area that is tattooed with black ink the watch would automatically lock again.” 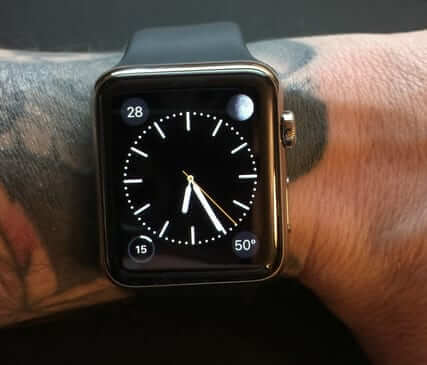 The story has since lept from Reddit to mainstream media, including a piece by Reuter’s reporter Matt Siegel, who himself is tattooed, and found the same issues with his Apple Watch.

“This Reuters reporter,” says Siegel in his article on Reuters about #TattooGate, “who has a black tattoo on his left arm, also found that the watch locks on tattooed skin and does not deliver the soft pings that alert a user to incoming messages. The heart rate readings were also significantly different on the tattooed and untattooed wrists.”

Apple lightly acknowledges this on their Apple Watch product support page, when they say “Permanent or temporary changes to your skin, such as some tattoos, can also impact heart rate sensor performance. The ink, pattern, and saturation of some tattoos can block light from the sensor, making it difficult to get reliable readings.”

However, it appears that this section was added the day after this story broke, as not only does the page show as having been updated after the story broke, but an earlier version of the page stored at archive.org contains no mention of tattoos anywhere.

So, if you are inked, and were thinking of getting an Apple Watch, think again.

But what should those who already have both the watch, and a tattoo on their wrist, do?

The only advice from Apple, so far, is for the heart rate function, for which, says Apple, “you can connect your Apple Watch wirelessly to external heart rate monitors such as Bluetooth chest straps.”

Guinne55fan is somewhat more helpful, having updated his original post to say that “by turning off wrist detection messages are being pushed to the watch now. I believe this will hinder apple pay though because I can’t use the password (because the watch can’t detect my wrist), but at least it’s working now.”

Here’s how to turn off wrist detection:

Go to the Apple Watch app on your iPhone. Tap on “My Watch”, then go to General settings. Here you will find the Wrist Detection toggle, and you can turn if off. Note that turning Wrist Detection off will disable the ability to use Apple Pay.

Apple Settles iCloud Storage Breach of Contract Class Action Lawsuit: You May Be Owed Money (Plus Fu...
Apple Pay Later Coming in iOS 16: Buy Over Time, No Interest!
How to Block Someone on Your iPhone and Do They Know When You Block Them?
How to Make Your Mac Notification Settings Stick
Can't Download Gmail after an OS Update or Upgrade? This May be the Problem
Wondering What are FANG Stocks? We Explain (Hint: They Should Now Be Called FANA Stocks)
How to Get to the Beginning of, Search, and Print a Long iMessage Thread
iTunes Does Not Recognize iPhone? Here's What to Do
Share the knowledge

Number of people who have enjoyed this article: 1,564