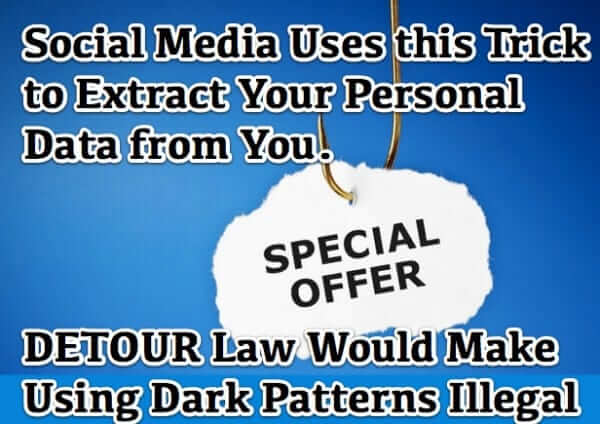 Legislation introduced in Washington would make the practice of using so-called ‘dark patterns’ illegal. The bipartisan (!) bill is called the DETOUR Act, and stands for the Deceptive Experiences To Online Users Reduction (DETOUR) Act. Dark patterns are web interface designs created to manipulate users into taking actions and providing data that they otherwise wouldn’t. Dark patterns are based on behavioral psychology.

Says Senator Warner, in a published statement, “For years, social media platforms have been relying on all sorts of tricks and tools to convince users to hand over their personal data without really understanding what they are consenting to. Some of the most nefarious strategies rely on ‘dark patterns’ – deceptive interfaces and default settings, drawing on tricks of behavioral psychology, designed to undermine user autonomy and push consumers into doing things they wouldn’t otherwise do, like hand over all of their personal data to be exploited for commercial purposes. Our goal is simple: to instill a little transparency in what remains a very opaque market and ensure that consumers are able to make more informed choices about how and when to share their personal information.”


The term ‘dark patterns’ was thought to be first coined by Harry Brignull. In fact, Brignull himself says that he first coined it, saying that, coincident with his interest in unethical user experience design, “A few years ago I coined the term “Dark Patterns”, and I’ve given numerous conference presentations on the subject.”

Brignull runs a website at Darkpatterns.org which, he says, is dedicated to spreading awareness and discouraging dark pattern practices.

On his site, Brignull elaborates on what is a dark pattern:

When you use websites and apps, you don’t read every word on every page – you skim read and make assumptions. If a company wants to trick you into doing something, they can take advantage of this by making a page look like it is saying one thing when it is in fact saying another.

We’ll be honest – we don’t think that the term ‘dark patterns’ really works in this context. ‘Slimy practices’, ‘Obscuring tricks’, ‘Bait and switch”, yes…but dark patterns, we don’t think, captures it for the average consumer.

But whatever you call it, it’s wrong, and we’re glad that Brignull is shining light on those dark patterns, and glad that our legislators consider the issue bad enough to come together on bipartisan legislation.

You can read the full text of the proposed DETOUR Act here.

Lawsuit against Facebook for Tracking of Logged Out Users: Update on Perrin Davis v Facebook 17-1748...
National Online Sex Offender Registry Opens for Business
What is a Selfie Stick, and Do You Need One?
How to Live Life Online When You Have To
The Social Movement Known as "Black Twitter"
The 5 Best Note-taking Apps Ever
New "4th Amendment is Not for Sale" Bill Would Ban Police from Buying Your Personal Data
Paternity Notice on Facebook not Enough for Termination of Parental Rights, Rules Court
Share the knowledge

Number of people who have enjoyed this article: 1,230