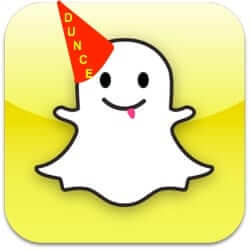 SnapChat rejects Facebook to the tune of $3billion, it’s true. However, the purported letter from SnapChat CEO Evan Spiegal to Facebook Founder Mark Zuckerberg that is making the rounds is a spoof.

Of course, turning down $3 billion for something that is fairly trivial to create may be the height of idiocy, and is probably spoof-worthy. But nevertheless, the letter making the rounds in which Spiegal supposedly mocks Zuckerberg, saying things like “I’m sure you get it, brosepher. You can probably still remember being a hot-to-trot brogrammer, back in the day, when you were still 23,” just ain’t real.

That said, the reason given for the rejection is that SnapChat is, according to industry sources, “being courted by multiple investors.”

As to why Facebook would want to acquire SnapChat, according to Julie Ask, an analyst with Forrester Research, “If Facebook is saying they are having an issue with teens and they need to find an app for teen advertisers, then it’s logical to find an app where teens are spending their time.”

In the meantime, the spoof letter, supposedly written by SnapChat founder Evan Spiegal, is making the rounds. Here is the meat of that letter:

I wanted to hit you up personally to tell you how gutted I am that stuff didn’t work out between Facebook and Snapchat. It’s a bummer, but Facebook just isn’t the smexy young hookup we’re looking for, $3 billion or not. Sorry to be a buzzkill.

We both know what it’s was like to be a little too badass for college — you for Harvard, and me for Stanford. We also both know how to party hard in Palo Alto. I bet your ragers with Sean Parker are pretty similar to the stuff that got my frat, Kappa Sigma, kicked off campus.

That’s why you’ll totally understand that the reason Snapchat couldn’t take your money is that — no offense, bro — it’s ‘cause even though we don’t have any kind of revenue stream, in a few years, our mascot, Ghostface Chillah, is going to be all kind of dancing on Facebook’s grave. I’m sorry, but kids just don’t do Facebook anymore, Zuck. You’re like Tom from Myspace. Or what was that other thing our parents had? Friendster? Did they have a mascot?

We’re not sure where it originated, but you can see it in its entirety at Snapchat CEO Evan Spiegel’s $3 Billion Rejection Letter to Facebook’s Mark Zuckerberg

How Delete a Photo from an Existing Facebook Post
Facebook's Graph Search Turns Facebook into Best Dating Site on the Internet
Calls for Users to Leave Facebook Amid News that Facebook Quizzes Facilitated Cambridge Analytica Fa...
Google Photos Will No Longer Back Up Images From Messaging Apps by Default
Facebook Sued, Settles, for Allowing Underaged Girl to Open Account
Reposting Images on Social Media? How it Can Get You in Trouble
How to Take Charge of Your Facebook Newsfeed
New Facebook Safety Check Offers Check-in for Users in Disaster Zones
Share the knowledge

Number of people who have enjoyed this article: 4,321