In a much-hoped for move, Skype and Skype Out now work with 3G, at least on the iPhone and iPad. The bad news is that Skype-to-Skype calls on 3G will cost you money (after a free period that lasts through at least August, and maybe through the end of the year).

In an upgrade to the iPhone / iPad app over this past weekend, Skype announced that “Upgrades and improvements include call using your 3G connection. Skype-to-Skype calls on 3G are free until the end of 2010, after which there will be a small monthly fee. (Operator charges for data will still apply.)”


With respect to when the fees for Skype-to-Skype calls over 3G kick in, there is some confusion, as upon first use, the upgraded Skype says that they will begin in August, even though the app store listing says they will be free until the end of the year.

There was no information on what the cost for Skype over 3G calls to land lines and other phones is, however our tests indicate that the normal Skype out charges apply.

So how’s the quality? Pretty darned good, in our tests. Still not, on the iPad, enough to get us to ditch our cell phone though, as you still can’t use a standard Bluetooth headset with the iPad (only stereo Bluetooth headsets, which don’t easily fit in a purse or pocket, work with the iPad).

Still, this is a big step forward in the removal of restrictions on the technology. 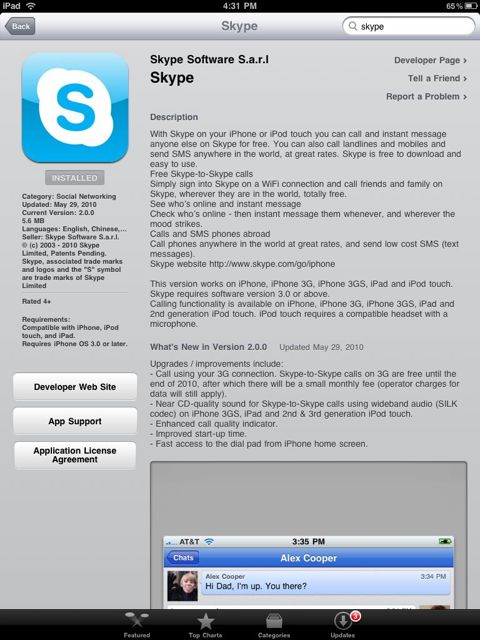 How to Delete iPhone Text Messages Attachments and Regain Space on Your iPhone
Bug in FaceTime Lets Callers Hear Your Audio Even if You Haven't Accepted the Call - Also How to Dis...
How to Send and Receive Text Messages on Your Mac Computer
How to Find Those Big Files Taking Up Space on Your Mac Hard Drive
How to Have Siri Compose an Entire Email with Just One Command
How and Why to Use Apple Pay Even if You Only have an iPhone 5
Best Image to Text OCR App for the iPhone and iPad - and it's Free!
How to Easily Draw and Write on Pictures You are Sending in Email with Your Mac

Sunday is Last Chance to Get Unlimited Data Plan for iPad 3G which Goes Away on Monday, June 7th