The Detroit Free Press is reporting on a second Tesla autopilot crash. The crash, which was nonfatal, occurred last week in Pennsylvania. The more widely reported, fatal Tesla crash that happened in Florida on May 7th, killing Joshua Brown of Canton, Ohio, also involved the use of the autopilot feature.

Said Tesla, in a statement on Brown’s death, “Neither autopilot nor the driver noticed the white side of the tractor-trailer against a brightly lit sky, so the brake was not applied.”


We may never know what actually happened in that crash, although it appears that Brown was quite a fan of the Tesla’s autopilot feature, and so, presumably, was at least somewhat familiar with it. He in fact posted several videos of himself in his Tesla, extolling the virtues of the autopilot feature.

The second crash, which happened just this past week, on June 30th, happened on the Pennsylvania turnpike, and involved Albert Scaglione and son-in-law, Tim Yanke.

The Detroit Free Press reported speaking with the responding officer, Officer Dale Vukovich of the Pennsylvania State Police, who said that Scaglione had reported that he was using the autopilot feature when the crash occurred.

Officer Vukovich said, in his report, that the car hit a guard rail, and “then crossed over the eastbound lanes and hit the concrete median,” rolling onto its roof.

Tesla says that before using the autopilot, which they describe as an ‘assist feature’, the drivers are told that they have to maintain control and responsibility for their vehicle.

In an interesting, related development, Fortune is reporting that when questioned as to why Tesla did not disclose the May 7 crash prior to the Tesla stock offering on May 18 (in fact they did not disclose it until just last week, on June 30 – the same day as the second crash), CEO Elon Musk stated that the crash “is not material to the value of Tesla.” 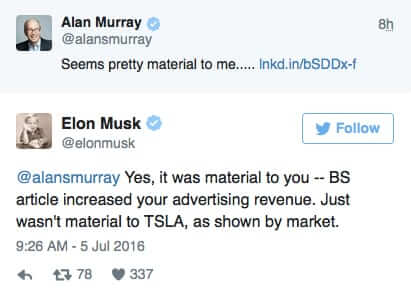 Musk added that “Indeed, if anyone bothered to do the math… they would realize that of the over 1M auto deaths per year worldwide, approximately half a million people would have been saved if the Tesla autopilot was universally available.”

During a Twitter exchange, Musk told Fortune Editor Alan Murray that the article (featuring his own words, sent in email to Fortune reporter Carol Loomis) was a “BS article.”

Browsing in Dark Mode: Why You Might Need to Turn Off The Light to Save Your Eyesight
5 Cool Google Messages Features that are Helping People Stay Connected
Why is Adobe Flash Player Being Discontinued? We Explain
How to Protect Your Digital Footprint from Prying Relatives and Friends
Cell Phone Holder for Car Uses CD Slot to Hold iPhone and Smartphones
Does Private or Incognito Mode Make Browsing Anonymous?
How to Use the Apple Watch as a Pedometer Without Your iPhone and No Extra Apps
Major Vulnerability in Security Protocol for Most Wifi Routers and IoT Devices Revealed, Codename: K...
13shares

One thought on “As Second Tesla Autopilot Crash Revealed, Musk says “Not Material””