Samsung’s newly accounced Galaxy Gear Smartwatch, despite the “smart watch” name, which is clearly intended to make it sound in the same league as a smartphone, is not a phone at all. Rather you can think of it as a ‘dumb’ extension for your Samsung Galaxy smartphone or tablet.

(By the way, in case you’re not sure, here is our article about the difference between a smartphone, a dumb phone, and a ‘feature phone’.)

So if the Galaxy Gear watch isn’t a phone, what does it do?

It alerts you to an incoming phone call, text message, or email that is received on your Galaxy smartphone or tablet.

Because, of course, your phone, which is almost certainly in your pocket or on the desk next to you, doesn’t do that.

Wait, yes it does.

And, you can read email or text messages on it. But only of a certain length, then you have to whip out your phone.

Oh, but you can use it to make a call through your phone.

Wait, yes they do.

Ah, but you can, according to Samsung’s Pranav Mistry, also “point and shoot” with the built-in camera.

Because that won’t be awkward, and you have no camera on your (required) Galaxy phone or tablet.

So what is point of the Smartwatch?

Are you going get one, or did you get one? If so, please let us know how long it took you to stash it in a drawer, or give it to someone, after the novelty wore off.

The Galaxy Gear Smartwatch will start shipping on September 25, to many countries, however it won’t hit the U.S. or Japan until sometime in October.

We wonder how much they are going to lose on it.

New Kindle Paperwhite Joins Confusion of Kindles – Which Kindle is Right for You? 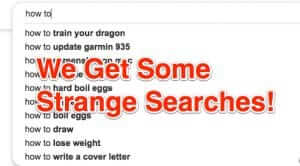 We Get Some Strange Searches