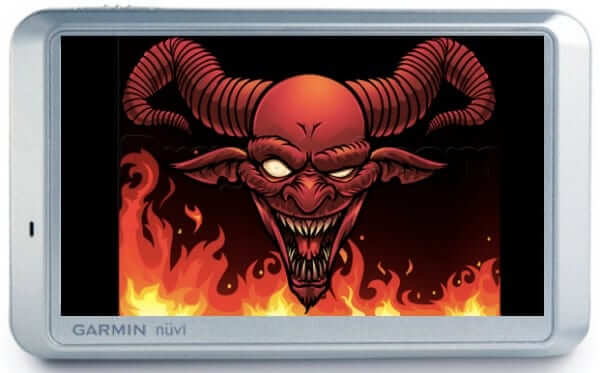 Car GPS units are supposed to help you navigate from here to there without a snag. And that’s certainly what Anthony Hoiberg and Clarinda Mojar of Australia thought when they referred to their Avis rental car GPS unit during a recent vacation in New Zealand. Instead, the car GPS unit lead them on a trip through several of Dante’s circles.

Instead of guiding them to the highway to which they were trying to get, the GPS unit lead them through some of the roughest and scariest terrain in New Zealand. They found themselves precariously clinging to a single gravel track, described by one official as a “goat track”, high above nothing but a sheer drop to rushing water on either side. In fog. Unable to even turn around on the narrow road, they had no choice but to press forward.


Explained Anthony Hoiberg, “There should have been a warning that we were about to enter terrain that is difficult, dangerous. None of those warnings came up. We were going at 10kmh, through water. We could see the drop, we were driving on the narrowest strip and we could see straight down and it’s water everywhere. We knew from the device we were heading north. We just assumed this could be a quicker route to another highway, but then it came up that it was 90km till the next turn.”

One New Zealand Conservation Departmant spokesperson said that Hoiberg and Mojar were extremely lucky to have made it through unscathed, and that there are insurance companies that won’t even insure cars in that area. Another government employee in the area, however, was dubious about their relying on the car GPS, when signs on the route indicated that the road was, in fact, closed.

Coming Soon to Your Car's Dashboard: Advertisements a/k/a Car Spam
The Truth about the Arizona Arrest of Someone Wearing an Anonymous Mask
Got a Tax Invoice from Intuit Quickbooks? Here's Why
The Dog Gadgets Available Online that You Never Knew You Needed
Vehicle to Vehicle "V2V" Communication Coming to a Car Near You
Turn any Dog or Cat Collar into a GPS Tracking Collar with this GPS Pet Tracker
How to Save Current Location in Newer Garmin Nuvi GPS Models
FCC Action Makes Countless Wireless Microphone Systems Obsolete

One thought on “Rental Car GPS Leads to Nightmare Vacation”