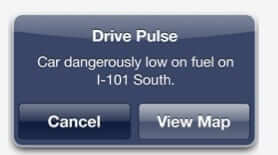 A driving app that monitors your teen driver is nothing new. In fact, teen driving monitor apps have been around for nearly ten years. What is new about the Drive Pulse app is everything that it does, because it also taps into your car’s on-board diagnostics (OBD).

DrivePulse is the invention of Giancarlo Daniele, a Stanford grad in his early 20s. He realized that every car built since 1996 has on-board diagnostics, and so an OBD port, and, as he explains it, “It turns out that that port is incredibly powerful,” because it “connects to your car’s brain.”

Once installed, DrivePulse will monitor and tell you about an astonishing array of things going on with your car while it is on the road. It will tell you if the driver slammed on the brakes, if they sped above 80mph, if they floored it (put the accelerator pedal to the metal), and if they are on the highway (presumably based on the constancy of certain speeds). It will also tell you if the check engine light is on, and even if the ignition is on or off. 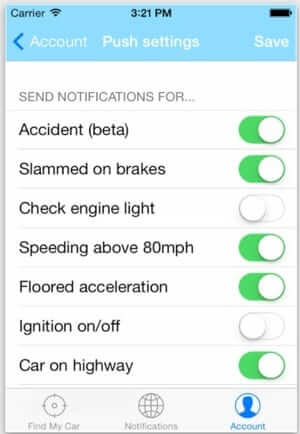 And, of course, it will tell you the location of the car which, coupled with the other available information, can be very useful (such as if the car runs out of gas), or very creepy (such as if the car is idling for an hour, and when you show up you realize it’s because your teen is in the back seat making out). 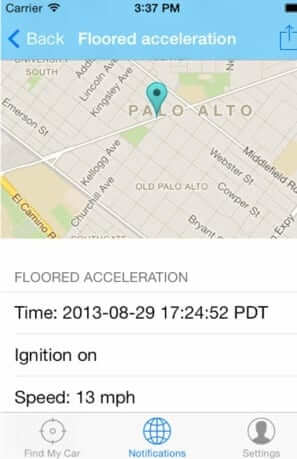 And it gets better (or worse). Says Daniele, “Another feature that’s very possible and we are so close to implementing is geo-fencing.”

Geo-fencing is when you get an alert if the device goes somewhere that you have defined as being off limits. Such as outside a certain distance from home, or over to Fang’s house.

Even Daniele himself acknowledges that the location-based stuff can be kind of creepy, especially the geo-fencing. However, he said, during market research, parents insisted on it. He explains, “That’s what they were willing to pay for.”

To use DrivePulse, you have to buy the Drive Pulse dongle ($69.99), and download the DrivePulse app, and then it costs $6.99 a month to subscribe.

iPhones Not Sending Text Messages to Android Phones Sparks iMessage Lawsuit
Using Smartphones to Track People Under Quarantine
New Wildfire Risk Assessment Tool Calculates Risk and Wildfire Risk Map for Any Address
How GDPR Affects Individuals in the U.S. and Around the World Including What Rights Individuals Have...
What is "Dark Social" Media and Does it Matter?
How a Meme Goes Viral, Takes on a Life of Its Own, Becomes Fake News and then Real: a Cautionary Tal...
Full Text of Obama's Speech on NSA Phone Metadata Collection Program, January 17, 2014
Twitter Competitor Mastodon - the New Open Source Social Network - Explained
Share the knowledge

Number of people who have enjoyed this article: 2,012