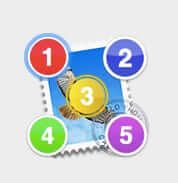 For Mac users who have been mourning the loss of the awesome eCamm program Dockstars for Mail, rejoice! The Dockstar app that adds up to 4 more “new mail in folder” icons to your Mail.app dock icon has been acquired and resurrected for both Mavericks and Yosemite (OS X 10.9 and 10.10, respectively) by Creative in Austria!

We have been using the awesome Dockstar for years; in fact it was one of our absolute must-have programs, allowing us to be notified immediately of important new email that bypasses the inbox (say,that you sort directly into its own folder). Say, for example, you have a rule that sorts any incoming email from your sweetie – or your boss – directly into its own folder.

This means that it won’t trigger the default ‘new email’ badge in your dock icon, because that only alerts you to new mail that lands in your inbox.

But Dockstar allows you to have new mail icons for new mail in up to four additional mail folders!

You can see how useful this is. So we were beyond bummed when not only did Dockstart stop working with the upgrade to Mavericks (OS X 10.9), but eCamm said they had no plans to upgrade Dockstar themselves and were looking for a new developer.

In fact, just two months ago, we got this message from them:

We had plans to update DockStar, but we needed to work with a new developer and eventually give it over to them entirely. Unfortunately, the new developer, like us, found the update for Mavericks compatibility to be too difficult and time consuming. We are looking for a new developer who may have interest in it, but at this point we do not know about the future of DockStar.

So, you can imagine how thrilled we were to discover that Creative in Austria had picked up Dockstar, and retooled it for both Mavericks and Yosemite! (Why we had to find this out by searching for it, rather than an email from either eCamm or Creative in Austria, is beyond us, as we would have jumped on it!)

You can download a free trial of Dockstar here, although we’re sure you will agree that it is well worth the $19.95 price.

5 Little-known WhatsApp Tips and Tricks You Need to Know
Make Your Mac Always Open Files with the Program You Want
What You Need to Know about TikTok
How to Make Your Mac Notification Settings Stick
Reminders Not Sending Notifications on iPhone? Try This
California State Bar Warns of Fraudulent Email
Macbook Grinding Away, Freezing, Super Slow, or Out of Space? Mobile Backups May be the Culprit
Allow Button not Working when App is Blocked from Loading on Mac? This May be the Problem! Plus How ...
Share the knowledge

Number of people who have enjoyed this article: 2,468