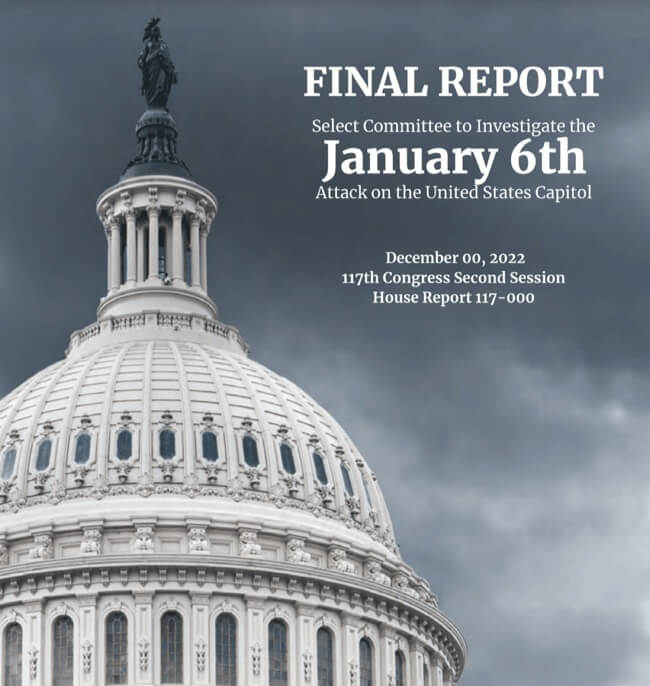 Last night the January 6th Committee dropped its full and final report, allowing the American public to see the full extent of the information they received and the evidence they developed over their nearly 2-year investigation. According to the Committee, “That evidence has led to an overriding and straight-forward conclusion: The central cause of January 6th was one man, former President Donald Trump, who many others followed. None of the events of January 6th would have happened without him.”

Note that the Internet Patrol makes no judgement nor offers any opinion about the contents of the January 6th Committee final report, we are simply making it available because we know how, and people are searching for it.

The full report is 845 pages. Even the Executive Summary, which was shared by the Committee a few days ago, is 154 pages long.

The Executive Summary concludes with seventeen specific findings. Here they are. You will find the full and final report of the Jan 6 Committee below the executive summary’s conclusions.

1. Beginning election night and continuing through January 6th and thereafter, Donald Trump purposely disseminated false allegations of fraud related to the 2020 Presidential election in order to aid his effort to overturn the election and for purposes of soliciting contributions. These false claims provoked his supporters to violence on January 6th.

2. Knowing that he and his supporters had lost dozens of election lawsuits, and despite his own senior advisors refuting his election fraud claims and urging him to concede his election loss, Donald Trump refused to accept the lawful result of the 2020 election. Rather than honor his constitutional obligation to take Care that the Laws be faithfully executed, President Trump instead plotted to overturn the election outcome.

3. Despite knowing that such an action would be illegal, and that no State had or would submit an altered electoral slate, Donald Trump corruptly pressured Vice President Mike Pence to refuse to count electoral votes during Congresss joint session on January 6th.

4. Donald Trump sought to corrupt the U.S. Department of Justice by attempting to enlist Department officials to make purposely false statements and thereby aid his effort to overturn the Presidential election. After that effort failed, Donald Trump offered the position of Acting Attorney General to Jeff Clark knowing that Clark intended to disseminate false information aimed at overturning the election.

5. Without any evidentiary basis and contrary to State and Federal law, Donald Trump unlawfully pressured State officials and legislators to change the results of the election in their States.

6. Donald Trump oversaw an effort to obtain and transmit false electoral certificates to Congress and the National Archives.

7. Donald Trump pressured Members of Congress to object to valid slates of electors from several States.

9. Based on false allegations that the election was stolen, Donald Trump summoned tens of thousands of supporters to Washington for January 6th. Although these supporters were angry and some were armed, Donald Trump instructed them to march to the Capitol on January 6th to take back their country.

10. Knowing that a violent attack on the Capitol was underway and knowing that his words would incite further violence, Donald Trump purposely sent a social media message publicly condemning Vice President Pence at 2:24 p.m. on January 6th.

11. Knowing that violence was underway at the Capitol, and despite his duty to ensure that the laws are faithfully executed, Donald Trump refused repeated requests over a multiple hour period that he instruct his violent supporters to disperse and leave the Capitol, and instead watched the violent attack unfold on television. This failure to act perpetuated the violence at the Capitol and obstructed Congresss proceeding to count electoral votes.

12. Each of these actions by Donald Trump was taken in support of a multi-part conspiracy to overturn the lawful results of the 2020 Presidential election.

13. The intelligence community and law enforcement agencies did successfully detect the planning for potential violence on January 6th, including planning specifically by the Proud Boys and Oath Keeper militia groups who ultimately led the attack on the Capitol. As January 6th approached, the intelligence specifically identified the potential for violence at the U.S. Capitol. This intelligence was shared within the executive branch, including with the Secret Service and the Presidents National Security Council.

16. Hundreds of Capitol and DC Metropolitan police officers performed their duties bravely on January 6th, and America owes those individual immense gratitude for their courage in the defense of Congress and our Constitution. Without their bravery, January 6th would have been far worse. Although certain members of the Capitol Police leadership regarded their approach to January 6th as all hands on deck, the Capitol Police leadership did not have sufficient assets in place to address the violent and lawless crowd. 21 Capitol Police leadership did not anticipate the scale of the violence that would ensue after President Trump instructed tens of thousands of his supporters in the Ellipse crowd to march to the Capitol, and then tweeted at 2:24 p.m. Although Chief Steven Sund raised the idea of National Guard support, the Capitol Police Board did not request Guard assistance prior to January 6th. The Metropolitan Police took an even more proactive approach to January 6th, and deployed roughly 800 officers, including responding to the emergency calls for help at the Capitol. Rioters still managed to break their line in certain locations, when the crowd surged forward in the immediate aftermath of Donald Trumps 2:24 p.m. tweet. The Department of Justice readied a group of Federal agents at Quantico and in the District of Columbia, anticipating that January 6th could become violent, and then deployed those agents once it became clear that police at the Capitol were overwhelmed. Agents from the Department of Homeland Security were also deployed to assist.

Full and Final Report of the Committee Investigating the Events of January 6, 2020

Criminal Uses Google Maps to Steal Roofs Off Buildings
U.S. Indicts 5 Members of China PLA's Unit 61398 for Economic Espionage (Full Text)
Full Text of the Mazars Letter to the Donald Trump Organization Withdrawing as Trump's Accountants o...
Google Driverless Car Hits Bus
Colorado Second State to Enact New Consumer Data Protection Law in 90 Days
PDX Carpet is Darling of the Internet
Explanation of What is Google LERS, Where to Find the Google LERS Portal, and How to Get Your Agency...
Facebook Sued by Attorney General over Cambridge Analytica Debacle
Share the knowledge

Number of people who have enjoyed this article: 35