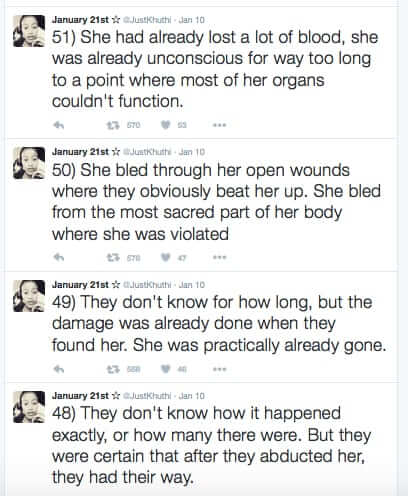 Remember War of the Worlds? Well essentially the exact same thing happened this past week on Twitter, as thousands of people tuned in, horrified, to watch the play-by-play updates of the search for a missing girl, Kamo, which culminated in the discovery of her rape and murder. Only it never happened.

And, just as with the War of the Worlds radio broadcast, the tweets by @JustKhuthi, purporting to detail the raping and murdering of her friend Kamo, were preceded by a tweet that indicated that it was a dramatization. It read “Story time ..”

Three minutes later, @JustKhuthi started spinning her story, a story which documented the rape and murder of her friend, Kamo (Kamogelo Peterson @kamo51702562).

Through a series of more than 50 tweets, JustKhuthi detailed Kamo going missing, Kamo being found at a local hospital, raped and bloodied, and then Kamo dying.

The thing is, those who didn’t see the “Story time ..” (or maybe even some who did), thought it was real.

Concerns and condolences flooded in to @JustKhuthi, and local media picked up the story.

The early Monday edition of the South African newspaper, The Star, ran the story of Kamo’s rape and death under the banner headline Tears for Kamo as her young life is senselessly and brutally cut short. 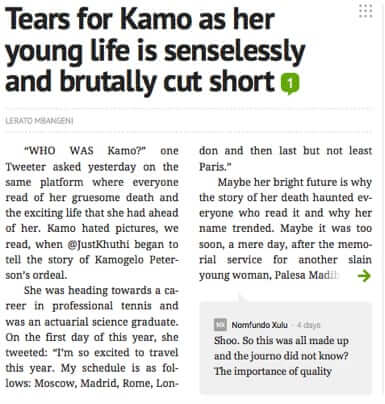 The paper later had to admit that its reporter had not fact-checked the story, and, according to The BBC, Star editor Kevin Ritchie acknowledged that “We are red-faced and not happy with this at all. We are doing whatever we can to learn from this because this is not the journalism we pride ourselves on practicing.. It is a huge lesson for us and the industry.”

But the paper wasn’t the only organization to be taken in. Even the South Africa Department of Women was duped, tweeting “Please be counted in and help us fight violence against Women and Children. The story of #Kamo is heartbreaking. GBV must end!” (GBV stands for ‘gender based violence’.)

JustKuthi played along, retweeting the messages of condolence, without ever revealing that it was all made up.

So why would someone do this?

As it happens, the Star reporter who wrote the first piece without fact-checking it, the piece that had the Star’s editor red-faced, wrote a second article, after tracking JustKuthi down.

Twitter skipping rent, selling office equipment
Justine Sacco and the Most Unbelievable Twitter Tweet of 2013
How to Live Life Online When You Have To
Social Media Campaign for Kidnapped Nigerian Girls Using Photos of Wrong Kids
Full Text of Daniel Kammen's Letter of Resignation to President Trump Spelling Out 'IMPEACH' with th...
First Rule of Office Affair: Turn Off the Lights and Stay Away from the Windows
Judge Rejects Twitter Lawsuit to be Allowed to Reveal Government Surveillance Requests (Includes Ful...
Twitter Goes from Favoriting with Stars to Loving with Hearts - Not Everyone Pleased
Share the knowledge

Number of people who have enjoyed this article: 1,080