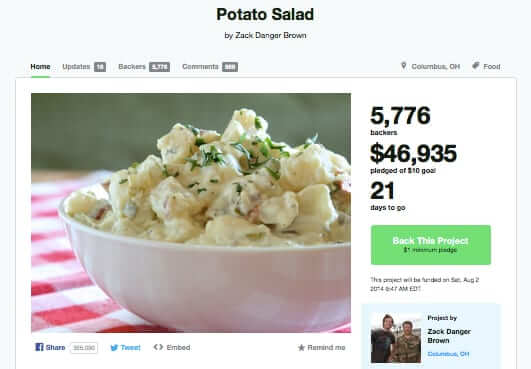 Here’s a recipe for the Kickstarter potato salad likely to be featured at #Potatostock: Take one creative entrepreneur, add equal parts chutzpah and child-like sincerity, mix in thousands of enthusiastic donors, and cook on Kickstarter for 7 days. Yield: $46,958. Serves: 5,779.

Wait, did we say “Potatostock”? Why yes we did, and we don’t mean a base for making vichyssoise. But more about that in a moment. First let’s talk about the Potato Salad Guy.

The entrepreneur is Zack “Danger” Brown, who, when he isn’t dreaming about making his first batch of potato salad ever (really?) is a co-founder at Base2.io, a creative digital agency.

Brown has said that he basically started the Kickstarter potato salad campaign on a whim. In an interview with BizJournals, the Potato Salad Guy explained that initially “The direct audience was people that I’m friends with that all share a very similar sense of humor. My thought was this could be a fun, cheeky way to invite them to a party.”

That may be how it started, but the Kickstarter Potato Salad campaign quickly went viral, and Brown’s $10 goal was exceeded many times over. At the time of the writing of this article, the Potato Salad capaign on Kickstarter had raise $46,958, with 21 days still to go. Of course, as the Washington Post points out, Brown will need to turn a lot of that over to the tax authorities.

And that doesn’t include the donations that are now pouring in to the effort. Hellman’s tweeted to Brown that they want to donate all of the mayo he’ll need, saying “Hey @ztbrown! We’re willing to donate ALL the mayo for your potato salad if you use @Hellmanns. Plus we have a chef in mind to help. YOU IN?”

And Brown just announced that the Idaho potato association offered to donate all of the potatoes.

In his Kickstarter campaign, Brown has promised everybody who has donated at least $3.00 that he will send them a bite of the Kickstarter Potato Salad. It’s true that nearly half of the backers have donated just $1.00 or $2.00, but that still leaves nearly 3000 people expecting to receive a bite of potato salad, and many of them live outside of the United States. (Other perks, depending on donation level, include Brown saying your name while making the potato salad, and a copy of a planned recipe book.) Just how Brown will get the bite of potato salad to all of those backers is a bridge he will have to burn when he comes to it.

Or, perhaps they will all come to him, at what promises to be the world’s biggest potato salad party. 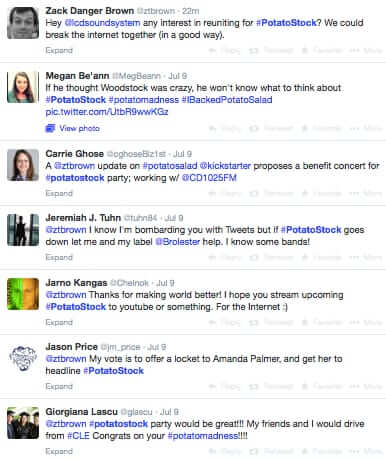 And already bands are offering to play Potatostock:

Of course, not everybody sees this as a big bowl of fun. Some are decrying it, calling it a stunt, and a misuse of Kickstarter. Brown acknowledges their concerns, in an interview with Mashable, “I totally understand where they’re coming from … Internet history is littered with people who took a ton of money from the Internet and become villains, betrayed the trust of people online.”

But, Brown assures, “We’re not going to be that.”

You can follow the Kickstarter Potato Salad campaign here.

And you can keep up-to-date on #Potatostock on Twitter.

What is a Selfie Stick, and Do You Need One?
Netflix Purity Commitment Ring Keeps Partners from Binge Watching without the Other
Trolls Just Wanna Have Fun: Study Finds Internet Trolls are Narcissistic, Sadistic Psychopaths
Darth Vader Posts Selfie to Instagram
Drive-Thru Lets Fast Food Customers Pay with EZ-Pass
Online Startup Plans Surprise Weekend Get-Aways for You - All You Have to do is Show Up
We Get Some Strange Searches
Is World War Goat Coming?
Share the knowledge